‘The Silver Secret of Caballo Bay’ Gets New Marketing Campaign 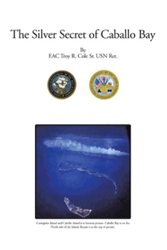 EAC Troy R. Cole Sr. USN Ret. wanted to put in the Library of Congress the story about the gold and silver that was in the Bank of Manila in 1941 prior to the Japanese occupation of the Philippine Islands. He also believes a very few people know about the people and the ships involved during that small operation during World War II. These reasons inspired him to write “The Silver Secret of Caballo Bay” (published by Trafford Publishing in March of 2011).

Set for a new marketing campaign, the book tells the story of a silver recovery operation in Caballo Bay. Some of the vessels that were involved in this operation includes the USS Canopus (AS-9), a submarine tender, the USS Pigeon (ASR-6), a minesweeper and the U.S. Army Mine Planter (USAMP) Harrison. It aims to provide a record about these ships and about the men who served on them.

An excerpt from the book reads:
After the surrender of Bataan on 9th April, it was obvious that Corregidor’s days were numbered. Excess material such as submarine spare parts, torpedoes, rifles, ammunition, etc. were destroyed or dumped into the sea to prevent them from falling into enemy hands. The treasure that had by far the greatest value was the (350) tons of silver pesos. The idea of blowing up the caves was quickly abandoned in favor of a proposal to make recovery of the silver considerable more difficult for the Japanese. This was done by dumping the silver in deep water off Caballo Bay, which of the Corregidor and is formed by the crescent shaped tail of this island and nearby Caballo Island.

About the Author
EAC Troy R. Cole Sr., USN (Ret.) was born in 1926 in Yucaipa, San Bernardino County, California. He attended Yucaipa and Redlands schools, joining the U.S. Navy in 1943 immediately following high school. He served in World War II and the Korean War in the surface navy as a quartermaster and transferred to the Seabees after the Korean War. After over 20 years in the navy, serving in a variety of overseas duty stations, Cole retired from the Navy as an engineering aide Chief. He has worked as a surveyor for Orange County, California. After retiring from the county of orange on Feb. 27, 1984, he now lives in Cedar Park.