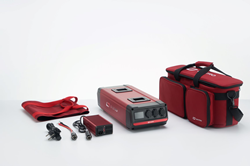 “We’re blown away by the support from our Kickstarter community. And we love the feedback we have gotten on how to refine our product to fit more of our backers’ needs,” said GOODBYECAR’s director Junhee Nam.

In just 4 hours, the GOODBYECAR team watched its first Kickstarter campaign with BASTRO hit over $10,000. Far less than half of Kickstarter’s projects ever reach this milestone, putting BASTRO high on the success rankings from Day 1.

BASTRO is a portable power station that carries 2,000Wh in 30lbs, which is 55% smaller in size and 40% lighter in weight than a portable power bank of equivalent capacity. Kickstarter backers have also raised interest in learning about its built-in battery management system (BMS). Its four temperature sensors are wired to prevent over-heating, over-charge, over-discharge, and more. BASTRO’s BMS also then sends prompt alerts to the user’s phone through its mobile app, letting them monitor the battery in real-time.

“We’re blown away by the support from our Kickstarter community. And we love the feedback we have gotten on how to refine our product to fit more of our backers’ needs,” said GOODBYECAR’s director Junhee Nam. He expresses his gratitude towards BASTRO’s backers for believing in their product despite having a denser reward price than most Kickstarter products in the tech category.

Nam assured the price reflects the high-quality lithium-ion battery type that runs BASTRO. Not only is it quieter and more power-efficient than other energy sources, but it also promotes sustainability for having a longer battery life and emitting far less carbon emission than gas generators. Lithium-ion is also commonly used in electric cars due to this nature.

Only a handful of Early Bird rewards currently remain, which puts BASTRO at its best deal of 35% off MSRP. The GOODBYECAR team is also giving out complimentary duffel bags exclusively to their Kickstarter backers during their 30-day campaign. To learn more about the team and BASTRO, please visit its Kickstarter campaign before its closing date of November 4, 2020.