World-renowned Economist and Nobel Laureate Dr. Joseph E. Stiglitz to Speak at Launch of the Otis Report on the Creative Economy of the Los Angeles Region

Nobel Prize-winning economist, Dr. Joseph E. Stiglitz, will discuss “The Great Divide: America's Inequality, its Causes and Consequences” at the launch of the Otis Report on the Creative Economy of the Los Angeles Region, February 25, 2016, 3:00-5:00 p.m. at the Bob Hope Patriotic Hall in downtown Los Angeles. 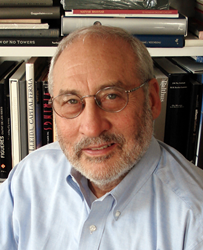 It is a privilege to have such a leading light provide us with insight and observation as we seek to understand the economic landscape we live in today.

Otis College of Art and Design is pleased to present the findings of the 2015 Otis Report on the Creative Economy of the Los Angeles Region with a special lecture by world-renowned economist and author Joseph E. Stiglitz. Dr. Stiglitz has received numerous awards including the Nobel Prize and the John Bates Clark Medal for his contributions to the field of economics.

Joseph E. Stiglitz is an American economist and a professor at Columbia University. He is also the co-chair of the High-Level Expert Group on the Measurement of Economic Performance and Social Progress at the OECD, and the Chief Economist at the Roosevelt Institute.  A recipient of the Nobel Memorial Prize in Economic Sciences (2001) and the John Bates Clark Medal (1979), he is a former senior vice president and chief economist of the World Bank and a former member and chairman of the (U.S. President's) Council of Economic Advisers. In 2000, Stiglitz founded the Initiative for Policy Dialogue, a think tank on international development based at Columbia University. He has been a member of the Columbia faculty since 2001 and received that university's highest academic rank (university professor) in 2003.

Based on academic citations, Stiglitz is the 4th most influential economist in the world today, and in 2011 he was named by Time magazine as one of the 100 most influential people in the world. Known for his pioneering work on asymmetric information, Stiglitz's work focuses on income distribution, asset risk management, corporate governance, and international trade. He is the author of numerous books, and several bestsellers. His most recent titles are Rewriting the Rules of the American Economy: An Agenda for Growth and Shared Prosperity and The Great Divide: Unequal Societies and What We Can Do About Them (2015).

“We are honored to have Dr. Stiglitz join us for this year’s Otis Report,” said Otis President Bruce W. Ferguson. “It is a privilege to have such a leading light provide us with insight and observation as we seek to understand the economic landscape we live in today. ”

Since its inception in 2007, Otis College of Art and Design has commissioned the Los Angeles County Economic Development Corporation (LAEDC) to generate the Annual Report on the Creative Economy of the Los Angeles Region (Otis Report). The Otis Report is an invaluable tool to assess the tremendous impact and influence of the area's creative sector on the economy.

For the third year in a row, the Otis Report will be expanded to include data and analysis for the state of California thanks to support from the California Arts Council. The 2015 statewide Otis Report on the Creative Economy of California will be released later this year.
Significant findings in the 2014 Otis Report on the Creative Economy of California include:
•Creative industry output totaled $293.8 billion (direct, indirect, and induced).
•The creative industry generated 1,447,100 jobs (direct, indirect, and induced), nearly one in ten of all wage and salary employment.
•Creative workers’ earned income was $113.5 billion.
•Creative workers paid $12.1 billion in taxes to California state and local governments.
•Creative industry jobs accounted for 9.6% of the state’s total workforce (direct, indirect, and induced).
•The largest direct job counts by creative sector in California were entertainment (164,000), publishing and printing (131,200), and fashion (120,100).
•Direct employment in California’s creative industries (694,900) was more than two and half times the number of workers that are employed in the computer and electronic manufacturing sector (262,900) and nearly twice the number who work in California’s hospitals (371,600).

The 2015 Otis Report will be available for download online at http://www.otis.edu/otis-report-creative-economy on February 25, 2016

ABOUT THE LOS ANGELES COUNTY ECONOMIC DEVELOPMENT CORPORATION
As the Southern California region’s premier economic development organization, the Los Angeles County Economic Development Corporation (LAEDC) provides collaborative, innovative and strategic economic development leadership to promote a globally competitive, prosperous and growing L.A. County economy to improve the health and wellbeing of our residents and communities and enable those residents to meet their basic human need for a job. We achieve this through objective economic research and analysis, strategic assistance to government and business, and targeted public policy. Our efforts are guided and supported by the expertise and counsel of our business, government and education members and partners. For more information, visit http://www.laedc.org

ABOUT OTIS COLLEGE OF ART AND DESIGN
Established in 1918, Otis College of Art and Design is a national leader in art and design education. The College mission is to prepare diverse students of art and design to enrich our world through their creativity, skill, and vision. Alumni and faculty are Fulbright, MacArthur, and Guggenheim grant recipients, Oscar awardees, legendary costume designers, leaders of contemporary art movements, and design stars at Apple, Anthropologie, Patagonia, Adobe, Pixar, DreamWorks, Mattel, Nike, and Disney.

The five-acre main campus is located on L.A.’s Westside near the beach and LAX; the Graduate Studios are in nearby Culver City, and at the 18th Street Arts Center in Santa Monica.

2,700 adults and children participate in Continuing Education art and design classes and workshops.

Additional information is available at http://www.otis.edu