Ed Pittman’s newly released “Daniel and Revelation” delves into the prophetic teachings of the Bible’s books of Daniel and the Revelation. 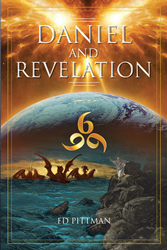 Pittman shares, “In 1987, when Ed joined a new church, the pastor was teaching on the book of Revelation. Ed so enjoyed the teaching that he decided to read what others had to say about Revelation. He quickly learned that there were many different interpretations of Revelation and other books of the Bible that contained prophecy about the end times or latter days. He decided that he needed to do more reading and study of Scripture as well as books written by others so he could come to his own understanding of what God was telling us about how he would bring things to an end. After much reading and prayer, his focus narrowed primarily to the books of Daniel and Revelation.

“The book of Daniel is about Israel in the time before Christ. The prophecy in Daniel begins with the Babylonian kingdom and continues through the Roman kingdom in such detail and accuracy that many believe it was written much later and is more historical than prophetic. It also tells us about the later kingdoms but in a much broader sense and less detail.

“The book of Revelation, written by John on the island of Patmos, tells us about the kingdoms that come after the Roman kingdom. Revelation tells us in great detail about Christ’s message to the seven churches and the seventieth week of Daniel’s prophecy of seventy weeks of years. This includes the breaking of the seven seals, the blowing of the seven trumpets, and the pouring out of the seven bowl judgments. Lastly it tells us the good news about the return of Christ and the establishment of his kingdom.”

Published by Christian Faith Publishing, Ed Pittman’s new book seeks to enlighten the readers’ minds on the will of God for humanity’s finality and how this will culminate according to the prophecies written in His Word.

This book shows the profoundness and genuineness of Scripture through the connection between the Old and New Testament passages that reveal the end-times happenings.

View the synopsis of “Daniel and Revelation” on YouTube.

Consumers can purchase “Daniel and Revelation” at traditional brick-and-mortar bookstores or online at Amazon.com, Apple iTunes store, or Barnes and Noble.

For additional information or inquiries about “Daniel and Revelation,” contact the Christian Faith Publishing media department at 866-554-0919.