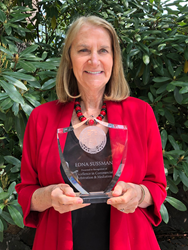 "[Edna's] arbitration decisions are insightful, always fair and informed by her considerable knowledge of the law, as both her peers and counsel have testified not only in North America, but around the globe..."

Edna started her career as an associate and litigation partner at the renowned international law firm, White & Case, before transitioning to dispute resolution practice full time. Over the past 20 years, she has served as both an arbitrator and mediator in several hundred commercial disputes, both domestic and international, with a focus on large and complex cases
.
Ms. Sussman serves on leading ADR panels around the world and has conducted arbitrations under many institutional rules. She is a former President of the widely-respected College of Commercial Arbitrators, she serves on the board of the AAA, as Chair of the New York International Arbitration Center and was the Founding Chair of the AAA-ICDR Foundation. Edna has also been appointed to the role of “Distinguished ADR Practitioner in Residence” by the Fordham University School of Law.

Edna has published and lectured extensively on arbitration and mediation and wins global recognition for her work as an arbitrator from many groups, including Chambers UK, Chambers USA, the Who’s Who of International Arbitration and Mediation, and Best Lawyers.

“Once the decision was made this year to recognize a luminary in the commercial arbitration field, Edna’s name came to the fore,” commented Darren Lee, NADN’s Executive Director. “Most everyone in the commercial arbitrator community knows of Edna’s reputation within the field. Firstly, she’s quite brilliant - her arbitration decisions are insightful, always fair and informed by her considerable knowledge of the law, as both her peers and counsel have testified not only in North America, but around the globe. But in addition to being an enormously effective arbitrator, we applaud Edna for the many hundreds of hours she’s ‘given back’ to the ADR community, from training the next generation of arbitrators to her pivotal role in the formation of the charitable AAA-ICDR Foundation, which has benefited so many worthy projects over recent years.”

The Distinguished Neutral of the Year Award is presented annually by NADN to an ADR professional widely considered by his or her peers to have achieved the highest level of excellence in the dispute resolution profession.