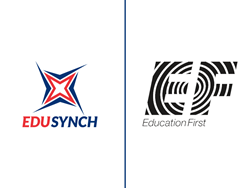 EduSynch’s large bank of preparation material is what we need to help our students practice and reach success at their tests.

EduSynch (by Dokimi, Inc.) is pleased to announce that the company has signed a deal with Education First International Language Campuses (EF) for the adoption of EduSynch’s adaptive test preparation and mock testing platform focused on the IELTS™, TOEIC® and TOEFL® exams.

Headquartered in Zurich, EF is one of the largest education companies in the world. It has over 612 schools and offices globally, with a presence in 114 countries. EF International Language Campuses has been in operation for over 50 years with the sole objective to “combine language training with cultural exchange, academic achievement and educational travel to deliver courses and programs that transform dreams into international opportunities.” EF also owns English Live, the largest online English school in the world.

As part of the partnership, EF has adopted the EduSynch solution to provide thousands of students in the EF network access to EduSynch’s adaptive practice and mock testing platform. The EF-branded EduSynch platform promises to help such students prepare for, and improve their scores on IELTS™, TOEIC®, and TOEFL® exams.

“Studying abroad has been and always will be a fundamental component in the development of a student,” says Sean Kilachand, Co-Founder and CEO of EduSynch. “Partnering with EF allows us to not only join forces with one of the most reputable educational companies in the world, but also to reach tens of thousands of students whose futures depend on their ability to do well on one of these English tests.”

“Many of our study-abroad students choose to take an official exam,” says Benjamin Delahaye, VP Academic Operations and Development for EF International Campuses. “EduSynch’s large bank of preparation material is what we need to help our students practice and reach success at their tests. The adaptive practice and realistic mock tests will also help them experience the test before they have to take it.”

On the heels of this deal, EduSynch continues its expansion throughout Europe and Southeast Asia with a focus on helping educational outfits around the world digitize their assessment needs.

Headquartered in New York City, EduSynch is one of the world’s foremost platforms designed for institutional English language proficiency testing. The company has over 250,000 users spread across 195+ countries in the world, and works with educational institutions around the world. EduSynch offers online test preparation and mock testing for IELTS™, TOEIC® and TOEFL®, but also offers general testing services using the CEFR framework.

Both platforms leverage the use of human evaluators and artificial intelligence for the Speaking and Writing abilities, as well as remote monitoring for security and guaranteed accuracy of results.

Education First International Language Campuses is a subsidiary of EF Education First, a global education company focused on language, academic, cultural exchange, and educational travel programs. EF was founded in 1965 with the mission to open the world through education. Headquartered in Zurich, EF is one of the largest education companies in the world, with over 612 schools and offices, and a global presence in 114 countries. The company also has over 52,000 employees throughout the world. English Live, the company's online English School, is the largest online English school in the world.