After successfully funding the original Kamibot on Kickstarter, 3.14 Co., LTD used the feedback they received from their backers to create Kamibot Pi. The product has launched on Kickstarter and will be looking to raise at least $10,000. 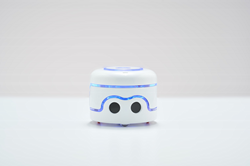 The original Kamibot was a programmable papercraft robot that was meant to teach the basics of coding for young students. After 30 days, Kamibot raised over $55,000 and successfully delivered all of the rewards that were claimed through its Kickstarter campaign. Since then, 3.14 has been going over the feedback from Kamibot's original backers and began developing a new, upgraded robot. The result of that process is Kamibot Pi and 3.14 has announced that they have launched a Kickstarter campaign for its latest product and are looking to secure at least $10,000 in funding to bring Kamibot Pi to life.

The original Kamibot used an open-source Arduino platform and could be coded through Scratch, a drag-and-drop programming language or can be controlled through the product application to perform various actions. The Kamibot Pi features several additional features such as unplugged coding, drawing capabilities, multi-robot coding, additional games, and even more curriculum options that allow teachers to seamlessly incorporate Kamibot Pi into their courses. 3.14 has also made additional upgrades to the Kamibot application, a scratch based coding app and has also introduced the release of the Kamicard app, which is meant for card-based unplugged coding.

There are four coding levels that students can gradually progress through to eventually reach text-based Python coding. The four levels are laid out in the following order:

Kamibot Pi launched on Kickstarter on November 4th. Super early bird prices start at $59 and are limited to only the first 50 backers. 3.14 anticipates Kamibot Pi to begin shipping in June 2020. For more information about Kamibot Pi, please visit its Kickstarter campaign page. Any editors or journalists interested in writing a feature about Kamibot Pi are also encouraged to reach out to 3.14 through Kamibot Pi's Kickstarter page.