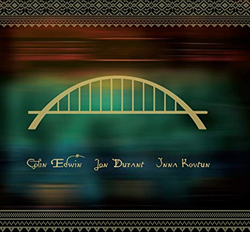 "Wild without being too far out." -Midwest Record

The resulting album showcases an unfamiliar but highly captivating and approachable sonic landscape, encompassing epic time-honored melodies supported by substantial rhythmic foundations embellished by Durants’s ornate and innovative approach to the guitar. With artfully assembled soundscapes complementing Inna Kovtun’s vivid and evocative vocals, this material sometimes shares an emotional character and atmospheric territory with groups like Dead Can Dance or The Cocteau Twins.

The video for “Hannochka” offers a continuation of the bridge theme, filmed on and around bridges in Kiev. Inna Kovtun is the dynamic centerpiece, her motion contrasted by the considered stillness of Edwin and Durant. Visually, the video also blends old and new, with Kovtun alternately dressed in a traditional wedding dress and a modern rock outfit, while Durant and Edwin transform from their normal attire into traditional Ukrainian costumes. The video was filmed and edited by Eduard Tymoshenko and produced by Igor Romanov.