For the eighth consecutive year, U.S. News & World Report ranks The Citadel as the #1 public college in the South offering up to a master’s degree. New top ranking in S.C. for Most Innovative Schools; #1 for veterans; engineering still top 25 nationally. 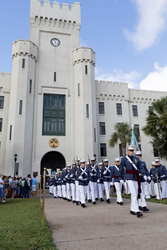 A Citadel education is based on the values of honor, duty and respect which clearly resonate with many families across America.

The Citadel moved up to #1 for Best College for Veterans in the South, from the #2 position last fall. Additionally, The Citadel is in the top ten for Most Innovative Schools in the South for the first time. At #9, The Citadel leads South Carolina institutions along with the College of Charleston, which tied for the spot. According to U.S. News & World Report, the innovative schools rankings come from input from the colleges and nominations from peers ”for those making the most innovative improvements in terms of curriculum, faculty, students, campus life, technology or facilities.”

“We do not take the U.S. News & World Report ranking of best public college in the South for granted. It affirms the effectiveness of dedicated faculty, staff, alumni and donors who are committed to our mission to educate and develop principled leaders,” said Lt. Gen. John B. Sams Jr., USAF (Ret.), interim president of The Citadel. “A Citadel education is based on the values of honor, duty and respect which clearly resonate with many families across America.”

The 2019 Best Colleges rankings were released Sept. 10 by the news outlet that was one of the first American publishers to produce a college rankings list based on a complex formula of publically reported data to help prospective students select colleges.

The Citadel earned notable rankings in the following areas:

“For members of the South Carolina Corps of Cadets, the U.S. News and World Report top ranking is a source of pride,” said Cadet Logan Miller, Regimental Public Affairs Officer. “This achievement underscores the effectiveness of our 24/7 military structure, cadet leadership and our shared commitment to always strive for excellence.”

The Citadel is also at the top of its peer group when it comes to alumni giving, according to U.S. News & World Report, which ranks The Citadel at 25 percent, followed by Elon University at 22 percent, with the average giving level at 7.37 percent, according to the chart.

“Alumni giving demonstrates the passionate commitment our graduates have for their alma mater,” said Jay Dowd, Ph.D., chief executive officer of The Citadel Foundation. “Our current 25 percent alumni participation rate represents a strong vote of confidence in the college’s strategic vision and the experience we provide for future leaders.”

Additionally, the 2019 findings show the student faculty ratio at 12:1, with 41 percent of the college’s undergraduate classes having fewer than 20 students.

According to U.S. News & World Report, it ranks only regionally accredited institutions with four-year undergraduate-degree-seeking students.

“The rankings are formulated based on data from and about each school in up to 15 areas related to academic excellence. Each indicator is assigned a weight (expressed as a percentage) based on U.S. News’ judgments about which measures of quality matter most,” according to the website.

A detailed breakdown of the methodology can be found on the Best Colleges 2019 Methodology webpage.

The Citadel, with its iconic campus located in Charleston, South Carolina, offers a classic military college education for young men and women focused on leadership excellence and academic distinction. The approximately 2,300 members of the S.C. Corps of Cadets are not required to serve in the military, but about one-third of each class earn commissions to become officers in every branch of U.S. military service. Citadel alumni have served the nation, their states and their communities as principled leaders since 1842. The Citadel Graduate College, founded 50 years ago, offers 25 graduate degree programs with 22 concentration options, 25 graduate certificate programs and 10 evening undergraduate programs in the evening or online. Named Best Public College in the South by U.S. News & World Report for eight consecutive years and No. 1 Best Public College for Veterans in the South. Learn more about Our Mighty Citadel here.