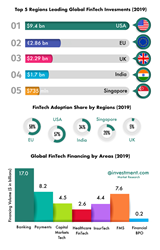 Fintechs are promoted to improve consumer finance. Today, Chinese Fintech companies are at the forefront of media for their money transfers, payments, crowdfunding, and digital currencies. However, Einvestment Fund analysts, through collected data, see the trend is heavily concentrated on B2B (business to business) rather than consumer-oriented Fintech.

The main four giants (Nutmeg, TransferWise, Ant Financial, and SoFi) started to focus on the B2C sector to gather big customer lists and brand exposure; however, this left many corporate and individual buyers feeling poorly served and neglected. One of the barriers faced by banks, insurers, and startups is that transactions from investments to payments of insurance are more complicated and less standardized than retail equivalents.

The introduction to API made a new step. It is the same system that is used in Google or Uber. Following that, Europe introduced the revised Payment Services Directive, and India developed an Immediate Payment Service.

Due to a large number of investments in Fintech, many investors are missing this point. However, Einvestment Fund has been increasingly investing in B2B rather than B2C startups from the beginning. September was a turnaround signal for B2B companies. Only in the third week for the B2B Venture Capital roundup, investors placed more than $128 million.

All this leads to the next logical turn for the Fintech industry. Let’s call it Fintech 2.0. It is the stage of transition from competition between Fintech companies and existing players to close cooperation – says Einvestment executive director Martha Vodvik. Europe is following the US market scenario. Since 2016, for the first time in the American market, the share of funded B2B projects exceeded half, accounting for 56% of raised funds directed to the Fintech sector. Such changes and this focus on B2B startups show investors believe that the future growth of Fintech startups is not a competition but cooperation with financial companies.

Despite the fact that the gap between B2C and B2B is still relatively big, it will shrink in 2021. At the same time, the transition to closer relations between Fintech and the formal financial industry does not mean that independent Fintech startups will disappear from the market, according to Einvestment.

Einvestment is a technology-driven mutual fund operated by an international team of fund managers with more than 200 years of total experience in the industry. Following the past performance reports, Einvestment fund managers are focused on most trending and promising economy sectors including Artificial Intelligence, Green Energy, Fintech and Health Care.