ElegirSeguro.com, an Innovative Insurtech for SME's is on the fast lane to becoming the"Next-Insurance" or "CoverWallet" for Latin America

ElegirSeguro.com, Insurtech for the Small and Medium businesses in Latin America is growing faster than ever. In sales, and invested by Chile's top insurance carrier Consorcio. 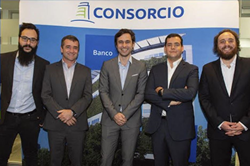 We look forward to making ElegirSeguro.com the best insurance platform for SME's in Latin America in the following years, said Martin Weidemann

These Argentinean guys are on the fast lane to becoming "The Leading Insurtech" in LATAM, oriented to small & medium business insurance site. Yes, the same path that was led by giants in the US like Next-Insurance or Coverwallet, now has its "tropical" version for Latin America, and it's great!

Diego Robledo (COO) and Martin Weidemann (CEO) have done great work making the first platform's impact in the Argentinean market. And now, they are both expanding to Mexican and Chilean Market. Right after participating in the region's top business accelerators (StartupChile.org and Parallel18.com) they have raised one of the most promising seed rounds for an insurtech in the southern cone. An almost 1 million round, led by Chile's top insurance carrier Consorcio, and other VC's like Arkfund from México.

We asked Martin Weidemann about the main objectives sought after this round, and he answered us, "We look forward to making ElegirSeguro.com the best insurance platform for SME's in Latin America in the following years."

We believe now the right way to do so, is launching our next version including more features for the insurance chain. The business, the carrier, and the reinsurer. As opening markets in bigger need of coverages than the Argentinean. It also becomes a good validation for us to operate in the continent in different countries, making us a great partner for international brokers with no platforms for reaching the SMB's.

This year and next Diego and Martin will be focused on growing the business and closing further partners & investment deals.