Landowners, Lee and Ryan Thomas, who were represented by Brigham Property Rights Law Firm, defeated Sabal Trail Transmission, LLC (“Sabal Trail”) as the Eleventh Circuit affirmed their two jury verdicts totaling over $1.3 million for easement rights for which the pipeline company earlier argued compensation should only be $39,700. 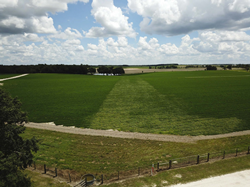 “We hope this helps others who follow after us . . . an owner should be able to testify as to the value of his land and the damages that result when a pipeline has been put through his land without his say so. It’s the owner that has the most to gain or lose.” - Ryan Thomas, Landowner/RBT Farms

The Eleventh Circuit Court of Appeals just affirmed two jury verdicts totaling over $1.3 million paid to landowners Lee and Ryan Thomas who had easement rights taken by Sabal Trail Transmission, LLC for which the pipeline company earlier argued compensation should only be $39,700.

Lee and Ryan were among Florida landowners who had to litigate with the pipeline company over the measure of compensation for a new 500-plus mile, 36-diameter, interstate pipeline which transmits 1 billion cu. ft. of gas per day to power plants owned by Florida Power & Light and Duke Energy.

Under the Natural Gas Act, Congress has authorized Sabal Trail to use the federal eminent domain power as a private licensee company. As such, court records show in March 2016 that Sabal Trail filed 263 condemnation cases in Florida’s Northern and Middle District Courts. Once federal courts granted Sabal Trail “immediate possession” of the easements rights in June 2016, Sabal Trail completed its construction of its new pipeline by June 2017. While Sabal Trail was allowed to proceed with its project, landowners in the pipeline’s path had to continue to fight with the pipeline company over the measure of compensation which includes payment for both the property taken and also severance damages to the landowners’ remaining property on either side of the pipeline easements.

The appeal followed a five-day trial before U.S. District Court Judges Mark E. Walker and Paul C. Huck held in Gainesville, Florida back in November 2018. Court records confirm that this was one of only two jury trials regarding Sabal Trail’s project in Florida. At trial, Lee and Ryan Thomas were represented by a team of lawyers from Brigham Property Rights Law Firm [http://www.propertyrights.com . The firm devotes its practice to representing property and business owners in condemnation cases, not the government or private corporations who are condemnors.

Sabal Trail’s appeal to the Eleventh Circuit sought to overturn the jury verdicts in the both Lee’s and Ryan’s cases. On appeal, Lee and Ryan were represented by Andrew Prince Brigham of Brigham Property Rights Law Firm and Mark F. (“Thor”) Hearne of True North Law Firm [http://www.truenorthlawgroup.com .

Brigham, who served as lead trial counsel and made the oral argument on appeal, explained, “It is rare that a landowner’s case proceeds to an appeal, let alone a jury trial, because the law determining the measure of compensation, more often than not, fails to include having the condemnor pay for the landowner’s attorney’s fees and costs.” Brigham added, “Most landowners can ill afford to proceed to trial against a billion-dollar company. However, because Sabal Trail was proceeding as a private licensee company under the Natural Gas Act and because Sabal Trail is not the federal government condemning land, the federal court applied state law to determine the measure of compensation. In Florida, the state law measure of compensation in eminent domain cases requires that the condemnor pay for the landowner’s attorney’s fees and costs. So, because of state law, Lee and Ryan had an equal footing to stand against Sabal Trail regarding the just and fair measure of compensation that should be paid for the easement takings.”

Sabal Trail acquired a 100-ft. wide easement corridor through the 837-acre farm owned by a trust over which Lee was trustee and an adjacent 40-acre homestead owned by Ryan, Lee’s son, who farmed the land. Sabal Trail’s corridor ran for over a mile, splitting a grove of mature oak trees, locating its pipeline within 300-ft. of Ryan’s home, and cutting a diagonal path through several of the 837-acre farm’s fields.

From the two jury verdicts totaling $1,324,703, the jury appeared to base their determination on 9% damages to the 837-acre farm and 50% damages to the 40-acre homestead.

On appeal, Sabal Trail’s chief complaint was that jurors improperly relied on the testimonies of the landowners because the amount of their verdicts exceeded the testimony of their own appraiser Ray. Sabal Trail further argued that their testimonies should have been excluded by the trial judges because they lacked a sufficiently strong foundation in that neither Lee nor Ryan had prior experience selling or buying properties encumbered with natural gas pipelines from which to quantify an opinion of severance damages. Because of this, the company argued their testimonies were speculative and purely conjectural and, as such, the trial judge abused his discretion by admitting their testimonies to the jury.

In deciding the two appeals, the Eleventh Circuit sided with the landowners Lee and Ryan Thomas. The panel, including Chief Judge William Pryor, Judge Robin Rosenbaum, and Judge K. Michael Moore (sitting by designation and is the Chief Judge of Florida’s Southern District) rejected Sabal Trail’s argument holding instead that the trial judge did not abuse his discretion in allowing the jury to hear Lee’s and Ryan’s testimonies. The Court’s per curiam opinion reads, “while providing little explanation for the specific values they testified to, we cannot say that their testimony was purely speculative or that the district court abused its considerable discretion in admitting it.” The opinion goes further explains the Court’s reasoning: “Lee and Ryan Thomas satisfied the low bar of providing some basis for their valuation testimony. Lee trained as a land appraiser early in his career. Both men bought and sold property in Levy County over the years and knew what prospective purchasers would be looking for in a piece of property. And they explained the negative impact of the pipeline on their farming operations and residential life.”

Once informed that the Eleventh Circuit upheld the verdicts, Ryan Thomas was finally able to express both relief and satisfaction, saying, “We hope this helps others who follow after us . . . an owner should be able to testify as to the value of his land and the damages that result when a pipeline has been put through his land without his say so. It’s the owner that has the most to gain or lose.”

Brigham gave the following statement as a final summary: “The Eleventh Circuit’s opinion is a needed precedent confirming that an owner can testify as a lay witness without further qualification as an expert in a condemnation trial. The Court made it clear that owners can testify about how much their properties decline in value after a pipeline encumbers them even when they haven’t bought or sold other pipeline-encumbered property. Moreover, the Thomases show, once again, that ordinary property owners can stand up and be paid a full measure of compensation even when the eminent domain power is wielded by a private, billion-dollar, for-profit company like Sabal Trail.”