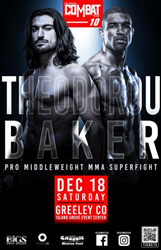 Elias Theodorou, MMA fighter and medical cannabis advocate, will be the first professional athlete to compete with an exemption for the use of medical cannabis in professional sport in the United States. The first ever American bout, with an in-competition Therapeutic Use Exemption (TUE) in place for medical cannabis, will occur on December 18, 2021. The State of Colorado granted the TUE to Theodorou in May 2021.

“Validating my US Colorado TUE for cannabis with a fight and finish will officially stamp my place in American sporting history as the first sanctioned cannabis athlete,” says Elias Theodorou. “This is a precedent not only for myself, but for other athletes in Colorado and other states, which in turn can create a wave of opportunities for other athletes to apply for the same right to medicate with cannabis in competition.”

The Middleweight fight between former UFC (Theodorou 18-3) and Bellator (Baker 18-5) veterans leads the ticket co-promoted by Colorado Combat Club LLC and will take place at the Island Grove Event Center in Greeley, Colorado. The fight will also be broadcast as a 21+ pay-per-view.

For exclusive content leading up to fight night visit Elias Theodorou Imagine BC Channel at https://portal.imaginebc.io/web/createAccount?inviteCode=TheManeEvent

Elias “The Spartan” Theodorou, is a top-ranked middleweight fighter who amassed an impressive 8-3 record during his time in the UFC. Elias is committed to fighting the stigma of medical cannabis in athletics. In January 2020, he became the first professional athlete to receive a Therapeutic Use Exemption (TUE) for medical cannabis, the first in combat sports or professional sports. Elias has transcended the stereotypes of a fighter by employing his advertising degree and corporate experience in the development, creation, and production of personal and corporate brands, including The Mane Event™, The Ring Boy™ and Weedbae™ When Elias is not busy training or competing, he’s working on several films and various TV projects. Elias is committed to using his growing platform to expand his reach beyond MMA and to fight for acceptance of medical cannabis in professional sports. Follow Elias on Facebook, Twitter, and Instagram.