“The Recrucifixion of Christ by Barack Obama and Christians Who Support Homosexuality and Abortions” from Christian Faith Publishing author Elijah Paul talks about the sins that Christians commit, as supported by the Bible. 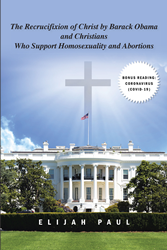 “This book was indeed written to remind Christians who support homosexuality and abortions that God is not pleased with them either, and God is just as unpleased with them as he is with homosexuals, bisexuals, transgenders, and people who support or participate with abortions, because Christians who support them are partakers with their sins (1 Tim. 5:22; Rev. 18:4). The Bible says, ‘Be not partaker or accessory to other people’s sins, that you may not receive the sickness and punishment that they receive for their sins, and to keep yourself pure’ (1 Tim. 5:22; Rev. 18:4). Christ says that he spits Christians out of his mouth who are not totally committed to him and to the Word of God (Rev. 3:15–16). Christ himself is the Word of God (John 1:1, 14; 1 John 5:6–8).

“This book is one of God’s responses to Barack Obama’s support of abortions, late-term abortions, the legalization of gay marriages, gays adopting children, and transgenders using the restrooms and locker rooms of people of the opposite sex and transgenders playing sports with children of the opposite sex. The statements in this book are not meant to be aggressive toward homosexuals and other sinners who are not gay, but are indeed written in response to an all-out aggressive attack on the Word of God by the media, politicians, some celebrities, and other anti-God people and organizations (John 1:1, 14; 1 John 5:6–8).

“When Christ lived on earth, the Romans ruled Israel and had the authority to kill Christ or set him free, but the Jews, Christ’s own people, demanded that the Romans crucify Christ. When gay marriages were legalized in the United States, Pres. Barack Obama and the Supreme Court were the equivalent to the Roman government that ruled Israel and Christians who approved of and supported abortions and homosexuality were the same as the Jews who demanded that Christ be crucified. Some Christians demanded that Barack Obama and the Supreme Court disregard God’s Word and legalize gay marriages and late-term abortions, just as the Jews demanded that Christ be crucified.

“This book highlights the ungodly laws and practices that Pres. Barack Obama help to initiate, and the author is one who stands with God and for God, and against anti-God and anti-Christ leaders, regardless of race or color. The only thing that matters is the saving of the souls of human beings from all races.

“Every statement against abortions and homosexuality in this book is supported by Bible scriptures at the end of the statement. Nothing was written based on personal opinion, propaganda, politics, or people pleasers. Everything written is according to the written Word of God Almighty and according to ‘thus says the Lord.’ Three Bonus Readings are included. The Bonus Readings are titled ‘Confessing with Your Mouth and Believing in Your Heart,’ ‘Baptism,’ and ‘Coronavirus (COVID - 19).’ The three bonus readings were added to help strengthen the life of both devout Christians and people who are new to the body of Christ, and to help people who Christ is calling to be true servants of the Lord.

“May the Lord Jesus Christ continue to bless you and your family as you read and live, now and forever. Amen.”

Published by Christian Faith Publishing, Elijah Paul’s new book shares with the readers that God loves all humans, but he is not pleased with all of them.

View a synopsis of “The Recrucifixion of Christ by Barack Obama and Christians Who Support Homosexuality and Abortions” on YouTube.

Consumers can purchase “The Recrucifixion of Christ by Barack Obama and Christians Who Support Homosexuality and Abortions” at traditional brick & mortar bookstores, or online at Amazon.com, Apple iTunes store, or Barnes and Noble.

For additional information or inquiries about “The Recrucifixion of Christ by Barack Obama and Christians Who Support Homosexuality and Abortions,” contact the Christian Faith Publishing media department at 866-554-0919.