Ella Henderson’s new book “Behind the Walls" is an inside look at the prison system within the United States, from the point of view of a corrections officer

Recent release “Behind the Walls" from Page Publishing author Ella Henderson provides a glimpse into the socioeconomic depravity that is the prison business. 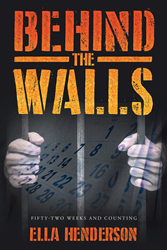 Ella Henderson, a previous adjunct professor who taught about the American court system, juvenile justice, and prison and society, and also left the prison system as a correctional officer to teach Texas history to seventh graders, has completed her new book “Behind the Walls": an inside look at the prison community, where a different type of social conflict exists.

Henderson writes, “This book is about my experiences as a correctional officer for the State of Texas. But before I tell you what’s going on behind the walls that very few people are aware of, I would like to tell you a little bit about the road which led me to this place. My life has not been easy. In fact, I look back in the past and wonder how I made it this far. I really don’t have to wonder. It was nothing but the Lord and, of course, my grandmother. Without the love and care of my grandmother, I probably would have ended up in a nuthouse or six feet under. She was my earthly savior. She was there for me when I almost lost my right eye from a car accident as a young girl. She was there and saved me from losing my left leg from a hole that was eating away due to a beating my mother gave me using an extension cord. She was there after I had my first child at the age of sixteen, and she even raised my son for me the first two years of his life. My grandmother was there when my first husband died from a gunshot wound, and I just knew I was going to lose my mine. Oh, what a lady she was! She was my everything. I can’t even recall her ever telling me ‘I told you so.’ She was an instrument God used to make sure I was around to do His work.”

Published by Page Publishing, Ella Henderson’s invaluable work details how here in the United States, a country that has the largest prison population in the world, reported as of April 6, 2020, for every 100,000 in population, there are currently 737 inmates locked up (worldpopulationreview.com).

Texas has an exceptionally high incarceration rate and according to Prison Policy Initiative, for every 100,000 in population, 891 individuals are incarcerated, and this does not include federal prison inmates. And of course, it’s no secret that most of the incarcerated population are people of color.

An inside look at the community, a community where a different type of social conflict exists. It’s a conflict which produces a struggle for power and respect. This conflict not only affects the incarcerated inmate but the correctional officers as well, whose number one goal is to make sure he or she leaves the same way they walked in.

Readers who wish to experience this riveting book can purchase “Behind the Walls" at bookstores everywhere, or online at the Apple iTunes Store, Amazon, Google Play, or Barnes and Noble.