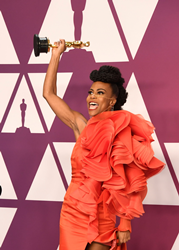 We are honored to present the International Woman of Change Award to Hannah Beachler, a true visionary who has used her considerable talents to build new realities on screen and in real life. She has changed history and continues to pave the way for girls everywhere to dream big.

Ellevate Network is proud to announce that the International Woman of Change Awardee for the 2019 Mobilize Women Summit, June 21 in NYC, will be Hannah Beachler, Academy Award winning production designer, who made history as the first African American to not only be nominated in the category, but also the first to win.

The prestigious International Woman of Change Award was created to highlight the dedication and efforts of one woman with outstanding achievements in using her platform to “ellevate” other women. Each year, Ellevate honors one woman who has used her social, political, or financial capital to create a more equitable and just world. Hannnah Beachler’s work as a production designer has broken down barriers, changed history, and set an example for millions of young girls who see that they can grow up to change the world.

Beachler has had an instrumental role in designing high-profile and widely acclaimed projects in recent years, often breaking down barriers along the way. Beachler designed Marvel's Black Panther for director Ryan Coogler, the 9th-highest grossing film of all time; she was both the first female and first African American to work as a production designer on a Marvel superhero film. For her incredible work on the project, she received a 2019 Academy Award for Best Production Design; a 2019 Critics’ Choice Movie Awards nomination; and a 2018 Hamilton Behind the Camera Award for Production Design, among others.

Beachler also worked on director Barry Jenkins’ film, Moonlight, a coming-of-age tale that transcends traditional genre boundaries, which won the 2017 Oscar for Best Picture. The film was named one of the top 25 movies of the 21st century by the New York Times.

“We are honored to present the International Woman of Change Award to Hannah Beachler, a true visionary who has used her considerable talents to build new realities on screen and in real life.” said Kristy Wallace, CEO of Ellevate Network. “Hannah Beachler has changed history with her achievements and continues to pave the way for girls everywhere to dream big.”

More about Mobilize Women
Mobilize Women is a movement based on Ellevate Network’s purpose of achieving equality for all, by giving diverse voices, and particularly those of women, a seat at the table where decisions are made. The Summit will cover topics such as Intersectional Identities, Changing the Culture of Business, Innovating the Future, Starting a Revolution, and more. Our confirmed speakers represent different races and ethnicities, age brackets, religions, and gender identities, because representation matters, and everyone deserves a chance to enact change.

To register as an attendee for the event on June 21st in New York City, please visit the event page here. To subscribe to the Ellevate Network newsletter and be notified of local events and announcements about Mobilize Women 2019, sign up here.

If you are interested in tuning in from afar on June 21, you can sign up for the Livestream of the event. For those interested in attending the event as media, please fill out this form.

About Ellevate Network
Ellevate Network is a community of professional women committed to helping each other succeed. We believe that when ambitious professional women get more opportunity — to have a voice in important conversations, to have a seat at the table where decisions are made, to steer our collective economic power towards that which we care about — it ultimately benefits everyone, and leads to a more equal world. Ellevate also works with companies committed to diversity and inclusion and has a proven track record of changing business culture from the inside out.