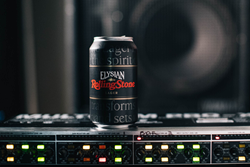 Elysian Brewing Company, a brewery rooted in music and art, and Rolling Stone, the music industry publisher on the bleeding edge of pop culture, have joined to produce Elysian Rolling Stone Lager, a high-end beer that embraces the spirit of music and looks to add a bit more magic to the world. It will debut this Saturday, February 1, at the Rolling Stone LIVE: Miami Big Game Experience and will roll out to beer-lovers nationwide in April.

The Rolling Stone collaboration is a milestone in craft brewing, and the first time the music publisher has put its iconic name on a craft beer. Both companies are rooted in their respective histories and constantly push to change and reinvent with the times.

"This one's for the rebels. Those with wandering souls who aren't afraid to be their truest selves while pushing boundaries in search of authentic art and discovery," said Elysian Brewing Co-Founder Joe Bisacca. "The Elysian brand was built on music and that gritty, unapologetic form of expression which is in our blood. It fuels us to keep experimenting and spread love back to those that inspired us. And what better way to do that than with our friends over at Rolling Stone?"

The Seattle-based brewery built its brand on music and wanted a beer that expressed the sensation that sparked fire in its soul. They decided that if they wanted to do it right, they should create a brand-new beer with the pioneers from Rolling Stone. And so, Elysian Rolling Stone Lager was born.

“The fact that Elysian has supported and been inspired by music and musicians since their beginnings makes this partnership a natural fit for Rolling Stone,” said Gus Wenner, President and COO, Rolling Stone. “We’re excited and proud to share our first venture into craft beer with our readers — we put a lot of passion into this project and we know they're going to love it.”

It’s not just the music that forms the symbiosis. Elysian’s approach to making beer is based on fearless experimentation, collaboration and boundary-pushing, a brewing approach aligned with Rolling Stone’s editorial bent. The brewery is fiercely proud of its culture of broad acceptance, and has long sponsored, supported, and actively participated in community events and celebrations that bring people together.

The Elysian Rolling Stone Lager will be the exclusive beer for the Rolling Stone Live: Miami event. It will be integrated throughout the event at all bars, displays and bottle service tables. See event details here. To catch live updates from the event, follow along at #RSLive, @RollingStone, and @ElysianBrewing throughout the weekend.

About Elysian Brewing
Elysian Brewing was founded in 1996. They have been upending brewing norms ever since. They shake up classic styles, use unusual ingredients, and learn through experimentation. Don’t tell them there are limits. They won’t listen. Their creativity pushes far beyond brewing. Each beer label is made by an in-house team who pull inspiration from design, photography, music, clay, paint, needlepoint, hell even the occasional tattoo. Have a beer at one of their Seattle locations or check out http://www.elysianbrewing.com to find a beer retailer near you.

About Rolling Stone
Rolling Stone, the number one brand in music publishing, has been the leading voice of music and popular culture for 50 years. The multi-media brand features the latest in music reviews, in-depth interviews, hard-hitting political commentary and award-winning journalism across several platforms including magazine, digital, mobile, social and experiential marketing. Headquartered in New York, Rolling Stone provides “all the news that fits” to a global audience of approximately 60 million people every month and publishes over 100 pieces of content every day. For more information, please visit http://www.rollingstone.com.