To encourage people to VOTE, Modern Family Executive Producer/Writer Danny Zuker, releases He Started It!: My Twitter War With Trump with an introduction by Political Satirist Paul Slansky, on Amazon and other book sellers. 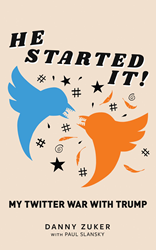 He Started It! My Twitter War With Trump by Danny Zuker

With only eight weeks until the Midterms, we’re releasing ‘He Started It!’ as a Call To Action to Get Out The Vote. ~ Danny Zuker, Modern Family Executive Producer, Comedy Writer and Emmy Winner.

“With only eight weeks until the Midterms, we’re releasing ‘He Started It!’ as a Call To Action to Get Out The Vote,” Zuker explains. “This strangely historic document of Donald Trump’s first persistent Twitter battle is a humorous - but deadly serious - reminder of the importance of voting. Please vote, and get your friends to vote!”

For comic relief, “He Started It!: My Twitter War With Trump” reveals:

@RealDonaldTrump tweeted
I can’t resist hitting lightweight @DannyZuker verbally when he starts up because he is just.so pathetic and easy (stupid!)

@DannyZuker replied
It’s adorable that you think you’re winning this. Bless that area on your body where a heart should be.

The actual tweets are reproduced, along with commentary from Zuker about this notorious 2013 Twitter War, which ended after three months when Trump, evidently tired of “so much winning,” blocked Zuker.

“All the childish language and the insane logic Trump used to engage me,” Zuker says, “he’s now using with world leaders.” Trump, who frequently referred to @DannyZuker as a “clown” and “loser,” today continues his assaults with schoolyard-level insults like “Crazy Joe Biden,” “Slippery James Comey,” “Sneaky Dianne Feinstein,” and, of course, among hundreds of others, the never-gets-old “Crooked Hillary.”

As an influencer still blocked by President Trump on Twitter despite a court order to unblock people, Zuker says, “I wear it as a badge of honor, like those who’ve had their security clearances stripped.” And Zuker’s ongoing tweets about and to Trump are regularly quoted in stories in Mashable, PBS Newshour, Breitbart News, and more.

BOOK
He Started It!: My Twitter War With Trump by Danny Zuker with Paul Slansky (Griffith Moon) is now available on Amazon, Barnes and Noble, BooksAMillion, and IndieBound. #HeStartedIt #Vote2018
https://www.amazon.com/He-Started-Twitter-War-Trump/dp/0999845284

DANNY ZUKER @DannyZuker is a five-time Emmy Award Winner, Comedy Writer/Producer, Podcast Host, TEDx Talk Speaker and AUTHOR of He Started It!: My Twitter War With Trump. Zuker is currently an Executive Producer/Writer for ABC’s hit comedy TV show, Modern Family, where he’s worked for the past nine years. Previously, Zuker worked on more than a dozen TV shows, including Evening Shade, Roseanne, Just Shoot Me, and, as Trump so cleverly tweeted at him, “so many flops.” As a regular at The Hollywood Improv Comedy Club, Zuker is part of the Smash Story show team. Zuker started out as an intern on The Howard Stern Show. His work has appeared in many media, including CNN, The Hollywood Reporter, Entertainment Weekly, Deadline, Mashable, The Hill, IFC and more. Zuker delights his hundreds of thousands of Twitter followers daily by trolling the leader of the free world. http://hestartedit.com

PAUL SLANSKY @slansky is a Writer, Producer, Political Satirist, Author and the EDITOR of He Started It!: My Twitter War With Trump. Slansky is the author of the best seller The Clothes Have No Emperor: A Chronicle of the American ‘80s and five other books (including My Bad: The Apology Anthology and The George W. Bush Quiz Book) that savagely mock the idiots, hypocrites and demagogues who masquerade as our “leaders.” On the big screen, Slansky is best-known as the Co-Writer of the feature film Picture Perfect, starring Jennifer Aniston. His magazine profiles, essays and humor pieces have appeared in dozens of publications, among them The New Yorker, The New York Times, Esquire, and Spy. Slansky’s self-described missions are “Amassing a memory for Americans allergic to accountability and addicted to amnesia” and, through his website http://www.TrumpelThinSkin.com and his relentless tweeting, “Inducing apoplexy in Donald J. Trump.”

Paul Slansky, Political Satirist and Editor, He Started It!: My Twitter War With Trump

Twitter Exchange @RealDonaldTrump and @DannyZuker in "He Started It!"