A recent study by PsychTests.com reveals that people who are in touch with their feelings enjoy a number of emotional, psychological, and social advantages. 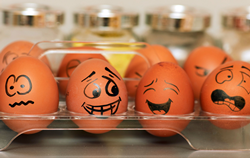 People who don’t consult their feelings tend to have self-esteem issues, to lack resilience, and to be unhappy with their lives.

When you consult your feelings, you gain access to information that cannot be accessed by your logical mind.

For the sake of professionalism, diplomacy, and decorum, people are often required to compartmentalize their emotions. A work meeting, a negotiation, or even just a trip to the grocery store are not good venues for the release of anger, tears, or even a joyous outburst, as it can be seen as, at best, a lack of decorum, and at worst, a lack of maturity. The fact that logic is often exalted and emotion vilified as unstable certainly doesn’t help. This has created generations of individuals who rarely consult their emotions to understand how they feel about a situation, who have dulled their gut instinct, and who are only living a half-life, where part of themselves is missing. But there are many benefits to getting in touch with one’s emotions, as revealed by a study conducted by PsychTests.

Analyzing data collected from 12,259 people who took the Emotional Intelligence Test, PsychTests’ researchers compared people who never consult their feelings (Emotion-deniers) to those who do so regularly (Emotion-users). Here’s where they differed:

“Emotions are always, always, a message - to be careful, to pay attention, to do or not do something. Such messages should not be ignored,” explains Dr. Ilona Jerabek, president of PsychTests. “Most importantly, when you consult your feelings, you gain access to information that cannot be accessed by your logical mind. The problem is that we often override what our emotions are telling us and dismiss it as irrational, and there is a great danger in that. Imagine conducting an interview with someone who looks amazing on paper - great education, lots of awards, plenty of experience, has all the skills you’re looking for. But when you sit down with a potential business partner, something feels off: you get this sinking feeling in your stomach, a mixture of fear, aversion, and discomfort. You can’t put your finger on it, but there is something wrong, and your feelings are raising a red flag. This is the purpose of emotions. They are a built-in alert mechanism to help you navigate the world, to understand others, and to understand yourself. And our study has shown that people greatly benefit from consulting their feelings.”

“Denying emotions doesn’t make us rational … suppressed emotions have a way of coming to the surface at the most unfortunate moments, resulting in outbursts of anger, sadness, panic or burnout. Even in people who pride themselves to be logical thinkers, emotions play a role in their decision-making; they just don’t realize it. It is wise to allow emotions rise to the surface, extract the information they carry along, and use your rational mind to analyze it. Acknowledging our emotions also makes us better equipped to manage them and to respond rationally instead of losing it.”

Want to assess your EQ? Check out the Emotional Intelligence Test by visiting: https://testyourself.psychtests.com/testid/3979

Feelings can be unpleasant, but they can also help us learn about ourselves, other people, and the world around us.Here’s how people who consult their feelings compare to people who do: