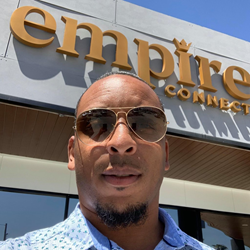 This store is an unrivaled environment showcasing what the future of cannabis retail and consumer choice should look like.

Empire, the leader in the Cannabis industry in the Inland Empire, today unveiled what is to be Southern California’s largest retail facility - boasting 26,000 square feet when completed, and will serve as Empire’s flagship operational headquarters and retail location known as Empire – Moreno Valley. The location will showcase an immersive customer experience, private client consultation spaces, and a state-of-the-art next-gen immersive customer experience spanning two floors of showroom.

“As a resident of Moreno Valley who has spent a lifetime in the Inland Empire, this unveiling is a milestone for me personally, and a major statement for the founding leadership of Empire,” said Chris Henry, Chief Operating Officer and Co-Founder of Empire. “This store is an unrivaled environment showcasing what the future of cannabis retail and consumer choice should look like. Our professional commitment to education, best practices and artisan quality has found a home, and Moreno Valley is now our gold standard for regulated cannabis access.”

Empire’s local engagement and commitment to best practices has defined its reputation for quality throughout the Inland Empire communities where it operates. “The Economic Development team and I look forward to welcoming Empire to the great city of Moreno Valley. It is great to know that the leaders of Empire have embraced Hire MoVal by hiring many Moreno Valley residents,” said Yxstian Gutierrez, Mayor of Moreno Valley.

The fast-growing vertically integrated operator now employs nearly 300 people across all its operations from the local cities they operate out of, including cultivation and manufacturing licenses in Cathedral City, Calif, retail locations in San Bernardino, Jurupa Valley, Moreno Valley, and 6 more projects in the pipeline for 2021 with a Lake Elsinore location in the works for late spring 2021.