Author Janet Perroni chronicles the fascinating life of, “Ava,” a beautiful woman from an Irish immigrant family in Boston, looking for love and acceptance during the challenging afterglow of WWI 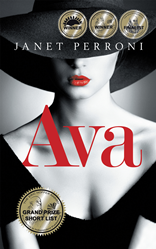 We live in a biased society and I want women to feel empowered by Ava’s journey that they too can overcome societal pressures and learn to survive and persevere.

Set in the 1920s during a time of awakening for many American youths, a beautiful young woman sets out on a journey of love, acceptance, and independence in the entrancing novel, “Ava” by Janet Perroni. Following the end of WWI, readers are introduced to the novel’s namesake, Ava, the daughter of an Irish immigrant family living in Boston, as she sets out for love and a husband but encounters various obstacles and hardships while trying to set her path for success.

After a suave and handsome sailor leaves Ava pregnant, she becomes an unwed young mother facing scrutiny and heartbreak while struggling to fight the stigmas of a judgmental society. Following a series of abuse and bad decisions, Ava eventually comes to learn the power of her sexuality and beauty, including exchanging sexual favors with her landlord to pay the rent and a doomed affair with her employer’s son, however she knows this lifestyle is not sustainable. Ava battles to maintain the delicate balance between motherhood and independence in an antiquated world that loves to shun and although her path is twisted and rife with despair, she eventually finds the strength to stand on her own.

“I not only wrote this book to provide a piece of escapism during these turbulent times but also to help shed light on the stigma still surrounding unwed mothers,” said Perroni. “We live in a biased society and I want women to feel empowered by Ava’s journey that they too can overcome societal pressures and learn to survive and persevere.”

“Ava’s story is rich with historical detail and captures a woman’s choices through limited opportunities imposed on her by tradition and religion. Ava’s beauty and sexual allure are the guiding forces of her life and lead her to extremes of great sorrow and dazzling ecstasy. Perroni presents these highs and lows in lush, extravagant sexual detail, exploring themes of pleasure and power.”
–Michelle Jacobs, The U.S. Review of Books

“The story gets more attention-grabbing with the twists and turns in the main characters’ lives. The reader gets to experience a series of varied sentiments – especially during emotional scenes…Janet Perroni is a remarkable author. The plot was exceptional and fascinating too, resulting in a STAR review.” – Aaron Washington, Pacific Book Review

About the Author
Janet Perroni was born and raised in Boston, Massachusetts. She graduated from Boston State College and received her RNBSN. When not working, she gardens, travels and enjoys time with her family. She currently resides just north of Boston in Medford, Massachusetts. The official book trailer can be viewed at https://www.youtube.com/watch?v=dRLlUoj5Dfc. To learn more, please visit https://www.jperroniauthor.com/.