Facts point to the need for leadership from venture philanthropists to foster a movement in churches to do something great: Help reach the target reduction goals in the Under-5 Mortality Rate by 2025. 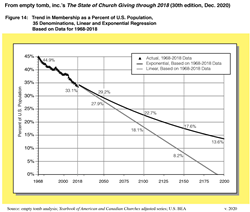 Facts in the new empty tomb book point to disturbing trends. The State of Church Giving through 2018 found declines in the church in the U.S., and also continuing deaths from treatable causes among the world's children under age five.

The book looks for possible answers as well as documents the problem trends.

Fact: Every 30 seconds, a child under age five dies from treatable causes around the world.

Fact: These children are located in 40 countries and are almost all "of color."

Fact: World leaders promised in 1990 and 2000 to reduce the rate at which children die, but did not reach target reduction goals, resulting in these 1.2 million child deaths each year.

Fact: The largest number of deaths is among newborns. The top three causes of death among those who survive birth are pneumonia, malaria, and diarrhea, all treatable in much of the world.

Fact: Churches in the U.S. have posted declines in giving as a portion of income between 1968 and 2018, the latest year available.

Fact: 34 Protestant denominations, including some of the fastest growing in the U.S., plus the Roman Catholic Church represented 45% of U.S. population in 1968 and 33% in 2018.

Fact: Of the increase in per member giving to churches between 1968 and 2018, 84% went to Congregational Finances, the expenses for operating the congregation for current members. A maintenance approach to church may be a setting event for an observation by the former Archbishop of Canterbury, Lord George Carey: "So many people do not see the average church as a place where great things happen …"

Fact: Churches traditionally have contributed to the greater social good. For example, a Washington Post article noted that 62% of the participants in a major national foodbank network were faith-based organizations. In the same article, Brad Fulton, associate professor of nonprofit management at University of Indiana-Purdue University, Indianapolis, indicated that religious congregations "ask people to give once a week, week after week. They tell people about volunteer opportunities once a week, week after week. There is no other social institution like them."

Summary: Children under age five, mostly of color, are dying at a rate of two a minute, while the church in the U.S. shows evidence of dying, both of which hurt the greater social good.

The U.S. is known for its creative approach to problem solving. In The State of Church Giving through 2018, empty tomb proposes that entrepreneurial approach be brought to the dual problem of child deaths and a dying church.

To start, empty tomb is looking for three to ten venture philanthropists to provide leadership to reverse both the child deaths and the decline of the church. The plan would be to mobilize Christian congregations to do something great: Help stop, in Jesus' name, 1.2 million annual child deaths by the year 2025.

In the first year of 2021, this small group would provide a total of $9.412 billion, of which $8 billion would be matched by Christian congregations in the U.S. Through empty tomb's Mission Match project, the congregations would apply for matching funds to undertake a project in one of the 40 countries, through the delivery channel of their choice. The goal of each project would be to help reduce the child death rate in that country. The venture philanthropists would see 85% of their donations matched by congregations, resulting in the $16 billion annual amount estimated as needed to help reach target reduction goals for the Under-5 Mortality Rate.

In the second year of 2022, additional venture philanthropists would be invited to participate, reducing the contribution needed from each of the larger donors.

Meanwhile, efforts would be underway to create a broad popular movement of contributions. By 2025, these contributions would be the major source of the Mission Match matching funds available to congregations for their projects to reach, in Jesus' name, target reduction goals.

More information about Mission Match is available at missionmatch.org.

The State of Church Giving through 2018 Fig. 1434 Protestant Denominations, including some of the fastest growing, and the Roman Catholic Church represented 45% of US population in 1968 and 33% in 2018.