Company founder Will Jackson recently joined the UKHouse Technology Envoy to the US to discuss RoboThespian robotics technology and new Mesmer humanoid robots waiting to delight and engage the public, post-COVID 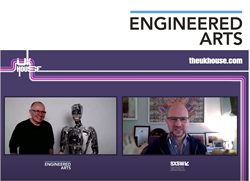 “While the ‘experience-economy’ has taken a beating during the COVID pandemic, we anticipate Engineered Arts robots—a combination of science, mechanics, and art—will 're-activate' to see a strong return in the second half of 2021." Will Jackson, Founder and Director of Engineered Arts

Engineered Arts, a UK company dedicated to creating the most memorable interactive character experiences through humanoid robotic development, recently participated in the virtual South by Southwest® (SXSW®) 2021 festival—a premiere digital experience featuring conference sessions, music festival showcases, and film festival screenings. As part of the Emerging Tech and Future of Entertainment series, Will Jackson spoke with Mr. Joe White, MBE of Her Majesty’s Consul-General Technology Envoy to the US about the advancements in robotic entertainment by humanoid robots that mimic living and historical characters.

During the virtual SXSW session hosted by UK House on YouTube, Will Jackson explained how Engineered Arts has developed and innovated some of the most unique mixed-media installations across the globe, incorporating humanoid and semi-humanoid robots over the past 17 years. Today, the company develops, sells and rents a wide range of its latest Mesmer-series robots, that incorporate hardware, sensors, firmware, and animation control software with realistic skinned, lifelike human facial attributes.

The UK House welcomed Cleo, one of the newest Engineered Arts’ Mesmer humanoids which co-hosted the chat with Mr. Jackson. While the COVID pandemic has temporarily shut down most of the entertainment, performance, museum, and trade event venues where one would interact with the RoboThespians and Mesmer robots, Jackson and his team at Engineered Arts have stayed busy innovating. The company’s main engineering, design, and production warehouse located in southwest England plan to unveil a new, advanced, next-generation robot, scheduled for later in 2021.

“There is a fantastic creative, educational system in the UK, and Engineered Arts relies on a combination of both art and science to create some of the most innovative robots for installations all over the world,” said Will Jackson, Founder and Director of Engineered Arts. “There is no denying that the ‘Experience-economy’ has taken a beating due to COVID restrictions over the past year—but we anticipate a strong bounce back as we enter the second half of 2021 as our robots re-activate to welcome and interact with live audiences,” added Jackson.

To learn more about Engineered Arts, the Mesmer series robots, and how to purchase or rent a robotic or humanoid creation, visit: https://www.engineeredarts.co.uk/

About South by Southwest SXSW
SXSW dedicates itself to helping creative people achieve their goals. Founded in 1987 in Austin, Texas, SXSW is best known for its conference and festivals that celebrate the convergence of the interactive, film, and music industries. An essential destination for global professionals, the event features sessions, showcases, screenings, exhibitions, and a variety of networking opportunities. SXSW proves that the most unexpected discoveries happen when diverse topics and people come together.

About Engineered Arts
Engineered Arts, Ltd. integrates a talented team of engineers and creatives, working together to produce technology that lives and breathes entertainment. At the heart of its robotic humanoids is Tritium, Engineered Arts' cloud based operating system for robot animation, interaction, maintenance and content distribution. For more information visit: https://www.engineeredarts.co.uk/