Zero Above, the creative design agency behind the Girls Allowed campaign to recruit more girls into engineering careers has announced that the initiative has been so successful in Essex that it will continue to be rolled out to colleges and employers across the UK. 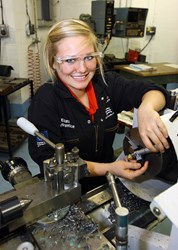 Girls Allowed is a focused and targeted campaign promoting STEM apprenticeships to young women and girls.

Research by trade body Engineering UK found that just 8.7% of professional engineers in the UK are women; the lowest figure in Europe, and one that risks the UK’s long-term reputation for engineering excellence.

The Girls Allowed initiative was created to redress this balance and inspire girls to consider engineering apprenticeships, with short and long-term engineering training, work placements and apprenticeships available through colleges, in partnership with local employers.

Creative design agency Zero Above created a campaign that would inspire girls and young women to consider apprenticeships in traditionally male dominated industries such as logistics, electronics, manufacturing and renewable energy. The agency worked with a strategist who was part of the hugely successful FRANK anti-drugs campaign and a similar female targeted recruitment campaign for the Royal Navy to create a brand and a concept that would engage with young women across Essex through social media, direct communications, incentives and an interactive website.

The take-up was encouraging; over the course of the campaign, each partner received an average of five active registrations every month, with a rapidly growing social media following seeing more than 8000 monthly page impressions on Facebook and a top spot on Google. Girls have been inspired by success stories including those of Shanice Brown, who secured an apprenticeship with defence contract company Selex Galileo, and Advanced Engineering apprentice Paige Tennison (pictured), who was offered three placements, choosing Applied Scintillation Technologies in Harlow.

Nikki Kennard, Marketing Manager at Chelmsford College, who took part in the initiative said: "the fact that women are so unrepresented in engineering roles is a national concern, so we understood the urgent need to recruit girls in to apprenticeships. We needed to find a way to engage with, and inspire young women in Essex from age 13 plus to show them the diverse range of opportunities available to them, in professions where they could have some amazing long-term career prospects. We also worked closely with some fantastic Essex-based companies to secure apprenticeships and work placements in engineering roles."

Now colleges and apprenticeship providers across the UK are invited to work with Zero Above to implement the Girls Allowed strategy in their own targeted regional campaign to include a dedicated website, social media feeds and digital and print marketing assets.

Simon Isaac, Strategy Partner for Zero Above said: "Girls Allowed is a focused and targeted campaign promoting STEM apprenticeships to young women and girls. So, whether it's a college meeting equality and diversity targets or an employer diversifying their workforce, this proven campaign can raise awareness of the potential for girls and young women to begin careers in fields they may never have considered previously."

Zero Above is a multi-award-winning creative agency who specialise in developing campaigns for the education and third-sectors, working with a number of education organisations and charities including Mind, Cancer Research and The Renewal Programme.