Layne Loessin, President and CEO of Entrust Energy, has been named to the Houston Business Journal 40 under 40 Class of 2017. 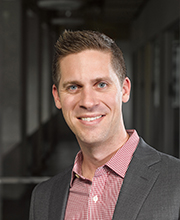 “I’m deeply humbled and honored to receive this special recognition. It is an even greater honor to be placed among such distinguished ranks as those of the current and past honorees.”

Layne Loessin, President and CEO of Entrust Energy, has been named to the Houston Business Journal 40 under 40 Class of 2017. Each year the HBJ recognizes 40 of the Greater Houston area’s top up-and-coming professionals under the age of 40. Honorees have to be nominated and are chosen by judges based on leadership, overcoming challenges and community involvement.

“I’m deeply humbled and honored to receive this special recognition. It is an even greater honor to be placed among such distinguished ranks as those of the current and past honorees,” said Loessin who has been in the energy industry for over 15 years. According to HBJ, hundreds of individuals from across all industries were nominated and this year’s honorees included CEOs and other leaders at a variety of for-profit and nonprofit organizations.

Loessin, who was the seventh employee of Entrust Energy, joined the organization in 2011 as Vice President of Supply. In 2015, Loessin was promoted to the role of President and CEO. Under his leadership, Entrust Energy has experienced considerable growth in both customers and market. Over the last two years, the Company has also expanded into eight markets and 36 utilities and today serves more than 200,000 customers. Layne is a graduated of Trinity University in San Antonio where he earned a B.A. in Economics in 2011.

“This is a well-deserved honor for Layne,” said Richard Poole, Chairman of the Board, Entrust Energy. “When it came time to select our new President and CEO in 2015, we looked no further than our internal talent. Layne’s keen business sense, strategic vision and passion for people made him the ideal candidate. His contributions to the organization have been considerable and during his tenure Layne has emerged as an up-and-coming leader in the energy industry. We are very proud that his dedication to his family, community and the employees of Entrust Energy is being recognized.”

“This recognition belongs equally to the great teams that I have had the good fortune to work with at the various stages of my career. It belongs to the talented group of visionaries who came before me and started Entrust Energy, as well as the many employees of our organization who are passionate about providing exceptional services to our customers and making a difference in their work each and every day,” said Loessin.