An incredible amount of concerts, sporting events and Broadway shows are scheduled in the near future at New York City. Epic Nation Tickets is offering discount tickets to all upcoming events in the Big Apple. 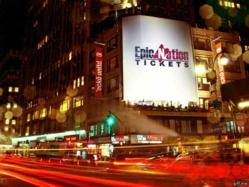 Epic Nation Tickets is offering discount tickets to all upcoming events in the Big Apple.

New York City is continuing to be the home of some of the best entertainment in the world. Many people all over the world continue to choose the “city that never sleeps” as their vacation destination. Whether you are looking to see the best in sports, awesome concerts or incredible Broadway shows, New York City is the place to be. Epic Nation Tickets is proud to offer cheap New York tickets to all upcoming events.

The Big Apple will be home of two of the biggest names in all of music for two amazing shows coming up. Making their way to Yankee Stadium will be the duo of Justin Timberlake and Jay-Z on July 19th and 20th. Music fans across the world have been anxiously awaiting the “Legends of the Summer” Concert tour, so the demand for Jay-Z tickets has been sky high. Epic Nation Tickets has incredible premium tickets for both nights to upcoming musical spectacular.

Another staple of New York is the incredible sports scene in the city. Always an awesome time for sports fans of all ages is witnessing the New York Yankees live at Yankee Stadium. However, this July, the New York Mets will host the MLB All Star game at CITI Field. For one night the baseball world will convene in New York City. Discount tickets are available only at Epic Nation Tickets.

Something that is always stable and offering up incredible entertainment for fans of all ages, is Broadway. Wicked tickets and Book of Mormon tickets continue to be high selling Broadway tickets, as well as long time favorites such as The Lion King.

Epic Nation Tickets is the number one source of tickets to all sports, concerts, Broadway shows and Las Vegas acts. All transactions are 125% guaranteed.