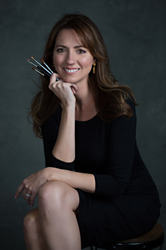 “In my years of experience, few presenters are able to establish such an excellent rapport with their audience while creating a truly memorable experience. It is what we feel best represents Delivering Joy.”

Today Shop LC announces that Erica Miles is joining as a special guest presenter for beauty products like The Hollywood Browzer, a tool for eyebrow shaping, hair removal, and dermaplaning.

Erica Miles is an Austin-based makeup artist and hair stylist who specializes in on-camera makeup technique. She has experience with photo shoots, television, and film sets on a national level. Ms. Miles has a BS in Television-Film Production, in addition to formal training with high-end cosmetics brands. In addition, she has worked closely with celebrities to help style their personal appearances, calling upon decades of image consulting experience.

“Erica is going to be a great guest for The Hollywood Browzer,” explains Cindy Derkacz, Shop LC Vice President of Merchandising. “In my years of experience, few presenters are able to establish such an excellent rapport with their audience while creating a truly memorable experience. It is what we feel best represents Delivering Joy.”

About Erica Miles
Erica is an Austin based makeup artist who also styles hair. With a BS Degree in TV-Film Production, and having worked in New York for 11 years, Erica is very experienced with on-camera makeup technique. Before starting her bridal beauty business in 2007, Erica did makeup on photo shoots, TV and film sets which gave her experience in all three arenas, and sparked her desire to also learn how to style hair. Her image consulting experience stems back to 1997 when she started developing marketable images for new models at John Robert Powers, where she consulted until 2007.

Erica landed the hair stylist position on the Martha Stewart Show in 2011 after being on the "on call" list since 2009.

Erica has been formally trained by high-end cosmetics brands such as Bobbi Brown, Laura Mercier, Awake Cosmetics, GoSmile and Sonya Dakar. She was on Bobbi Brown's "A Team" and accompanied Bobbi at her personal appearances in the New York metro area. Also, working side by side with Laura Mercier at her personal appearances in Manhattan gave Erica inspiration and a wealth of knowledge.