“Love and the Genders” from Christian Faith Publishing author Erik von Kuehnelt-Leddihn is an insightful understanding of the four forms of love and dives deep into the cultural and political issues within. 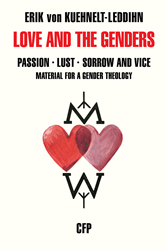 “Love and the Genders”: a detailed discourse stressing on the topic of love, genders, and relationship that will widen the knowledge and open the perspective of those whose minds are filled with questions. “Love and the Genders” is the creation of published author Erik von Kuehnelt-Leddihn, a writer who traveled across the globe to discover the human condition. Not an ordinary scholar, he spoke eight languages and had a reading knowledge of eleven others, necessary for his research. He also taught at numerous colleges and wrote many novels. His son and friend helped publish this manuscript.

“The book has profound cultural and even political implications. What are the qualities and qualifications of the sexes, their identities, and specific roles? Men are not superior to women and vice versa, but they are radically different, and the biological research in recent years has made a number of discoveries. We only know since 1958 for certain that every cell in the male body carries an additional element (the Y), but brain research has proven that the sexual differences are not only hormonal (known for a long time) but are also in the brain. Thus men and women are in no way ‘interchangeable.’ They are not made to ‘compete.’ Their differences are rather statistical than personal, and there are situations in which they can or must substitute for each other. Thus, queens might have to rule and men might have occasionally to tend babies (although they cannot nurse them). A high culture is ordered such that the sexes (genders) might get their fulfillment, and, naturally, they must feel affection for each other.

“The point of view of this book is Christian (which includes a Hebrew background). It is not specifically Catholic and does not deal directly with sexual ethics. (Contraception is a sexual problem; abortion is obviously plain murder.) Homosexuality is mentioned a bit more broadly. Misandry and misogyny are referenced in the North American and European situation. Friendship (not sex or Eros) is the most important element in marriage. (If one marries, can the partner be a friend for a lifetime? Fidelity belongs psychologically to friendship, not to Eros or sex.) What about the political aspect of the love (the interest, the enthusiasm) for ‘otherness’? Leftists are ‘identitarians.’ This book with its scope and documentation is quite unique. It deals basically with the crisis of our time and age.”

Published by Christian Faith Publishing, Erik von Kuehnelt-Leddihn’s new book brings to the readers a comprehensive discussion that explores the realm of love and its forms.
View a synopsis of “Love and the Genders” on YouTube.

Consumers can purchase “Love and the Genders” at traditional brick & mortar bookstores, or online at Amazon.com, Apple iTunes store, or Barnes and Noble.

For additional information or inquiries about “Love and the Genders,” contact the Christian Faith Publishing media department at 866-554-0919.