“Letters from Death Row: An Inmate's Search for Peace” from Christian Faith Publishing author Erin Taylor Daniels is an evoking account that shares an inmate’s insightful moments as he awaits his death sentence. 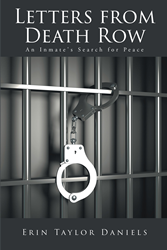 Daniels shares, “The sound of the judge’s gavel and his pronouncement of the sentence echoed in his mind, ‘Death by electrocution.’ How had he arrived at this place in his life?

Do you believe that people who commit heinous crimes are beyond redemption? Have you ever wondered what life on death row is like? If so, take a journey with Erin Daniels into the heart of death row and experience the real-life story of Larry Lonchar through actual letters they exchanged during the last three and a half years of his life. Get glimpses into life on death row and, most importantly, the real mental and spiritual challenges Larry faced as he searched for peace in the midst of his chaos. Was he able to overcome the obstacles to find true peace before he died, or did he settle for the false peace he thought only death could give him?

At the end of each chapter, Erin challenges you to think about and apply real-life concepts discussed within their letters. Letters from Death Row is a thought-provoking read that can be used for individual and/or group study.”

Published by Christian Faith Publishing, Erin Taylor Daniels’ new book presents a challenge for readers to internalize the words written in the paperback and apply the wisdom within in living life.

This book is truly a heartfelt read that also purports as a tool that guides people to be better and more resilient in facing life’s overwhelming tribulations.

View a synopsis of “Letters from Death Row: An Inmate's Search for Peace” on YouTube.

Consumers can purchase“Letters from Death Row: An Inmate's Search for Peace” at traditional brick & mortar bookstores, or online at Amazon.com, Apple iTunes store, or Barnes and Noble.

For additional information or inquiries about “Letters from Death Row: An Inmate's Search for Peace”, contact the Christian Faith Publishing media department at 866-554-0919.