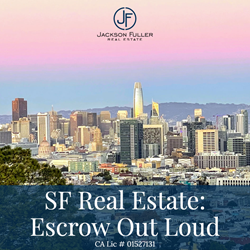 If you're serious about understanding racism in California real estate, these podcasts are a great place to start.

Escrow Out Loud, the podcast about San Francisco real estate from co-founders Matt Fuller and Britton Jackson of Jackson Fuller Real Estate, has released a three-part podcast series that looks at racism in California Real Estate. Prop 14: The California Fair Housing Massacre of 1964, One Community Activist & Four REALTORS® Discuss Racism, and Real Estate Racism in 2021 with Nate Johnson are all available for immediate download on leading podcast apps and stores.

Episode 108, Prop 14: The California Fair Housing Massacre of 1964, features the first Black president of the San Francisco Association of Realtors, retired real estate broker Don Saunders. Together with Matt, he shines a light on the fair housing massacre of the 1963 Rumford Act by 1964’s state ballot initiative known as Proposition 14. Prop 14 was sponsored, written, and supported by the state trade association now known as the California Association of Realtors. The outcome of that election truly changed the course of American history in ways that affect us to this day.

Episode 109, One Community Activist & Four REALTORS® Discuss Racism, begins with a powerful statement from Dave Walsh, 2021 President of the California Association of Realtors. The panelists then discuss the progress, setbacks, and impacts of racism in the Bay Area. It’s a lively roundtable that tells a more complete story than you’ve likely heard about housing racism in the Bay Area. Yes, even in tree-hugging progressive San Francisco, we have a deep history of housing racism.

Episode 110, Real Estate Racism in 2021 with Nate Johnson, features fair-housing advocate and Realtor Nate Johnson of Red Key Realty in St. Louis. Nate joins Matt to talk about the dog-whistle of “bad neighborhoods,” what racism in real estate looks like in 2021, and what we can all do to increase our awareness and decrease our biases when confronting racism in real estate.

Now in its fifth season, Escrow Out Loud is available through Apple, Google, Spotify, and directly from jacksonfuller.com. It’s an educational, insightful, and humorous discussion about San Francisco real estate based on Matt and Britton’s decades of experience. "If you're serious about understanding racism in California real estate, our 3-part podcast series is a great place to start," says podcast co-host ands brokerage co-founder Matthew Fuller.