By crossing the finish line at 11:46:48 Esimit Europa 2 managed to improve by more than one hour the previous best finishing time in the Palermo-Montecarlo Race set in 2010, and as the Esimit Sailing Team celebrated their triumph the nearest following rival was still sailing through the Strait of Bonifacio. The record time made the victory in front of the home yacht club even more exciting, all the more so since they arrived here to celebrate the 20th anniversary of the Esimit Europa project in the Yacht Club de Monaco at the end of next week. 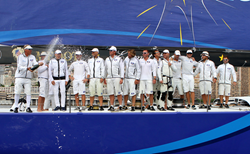 With an elapsed time of 47 hours 46 minutes and 48 seconds Esimit Europa 2 set the new record to enter the hall of fame of line honours victories in the 11th edition of the Palermo - Montecarlo Race. Esimit Europa 2 has been competing in this race in consecutive years from 2010 to 2012 and set the previous record in 2010, when the crew completed the 500 nautical mile course in 48 hours, 52 minutes and 21 seconds. This is already the 39th consecutive line honours victory for Esimit Europa 2 and her 4th at this race.

The founder of the project Igor Simčič was proud of his team and most satisfied with the performance of the yacht: “This is really a great result for the last race of this season, and crowned with a record. Now it is time to celebrate, but not only this record, we are also celebrating 20 years of the project here in the Yacht Club de Monaco next Saturday.”

On Friday August 21 at exactly midday amid a fleet of 37 yachts from 7 countries, Esimit Europa 2 set sail from the starting line in Palermo to embark on the 500 nautical mile long course from the Gulf of Mondello towards Port Hercules in Monte Carlo, where her home yacht club is based. The course took competing yachts through the gateway in front of Porto Cervo in mid-race, leaving Sardinia on port side, while after the gateway, yachts could choose whether to sail Corsica on port or starboard side.

Sailing in light sea breeze conditions, especially during the night time, the Esimit Sailing Team reached the midpoint gate in front of Porto Cervo in the afternoon of the second day and continued in the lee of Corsica during the second night before the crew caught some nice breeze in the morning bringing them home in a new record time for the race.

After this victorious finish, Jochen Schümann, the skipper of Esimit Europa 2 said, "It is a very surprising result that we finished in a record time on top of the line honours victory. The result is based on the very good start that we had, also on very good up and down sailing at the beginning that already enabled us to open up good lead, so that throughout the race we felt free to make our own racing decisions. I must say that our navigator Tom Addis did a great job and made very good decisions at some of the very crucial points during the race, around the Strait of Bonifacio and later on, so that we never stopped, which is very important in this race. This result is a great compliment to the team and the yacht just a few days before the celebration of the 20th anniversary of the project which will take place here in Monte Carlo.”

The Esimit Sailing Team sailed this race in its best formation with three key team members back in the team after taking part in the Volvo Ocean Race: helmsman Alberto Bolzan, navigator Tom Addis, and bowman Antonio Cuervas-Mons - Ñeti.

"I am very happy to be back on board Esimit Europa 2. After more than one year it is a pleasure for me to join the team again. In the last months I sailed every Ocean, it is a great feeling to come back at the helm of this boat for the Palermo-Montecarlo Race, one of my favourite offshore races in the Mediterranean, on board one of the fastest boats on the planet with a super crew. Nothing could be better than this to start again after the Round the World Race,” said the helmsman Alberto Bolzan.

This is already the eleventh edition of the Palermo-Monte Carlo Race, which is organised by the Sailing Club Sicilia in collaboration with the Yacht Club de Monaco and the Yacht Club Costa Smeralda.

About:
The Esimit Europa project is represented by the Esimit Europa 2 yacht with Gazprom as main sponsor and BMW as official partner, and by the Esimit Sailing Team which is composed of 18 world-class sailors from 11 different nations. She is one of the fastest and technologically most advanced sailing yachts in the world that has remained unbeaten on the water with 39 consecutive line honours victories. With each victory, she represents a strong symbol of unity and collaboration, since the Esimit Europa project is under the patronage of the President of the European Commission and has the official support of the President of the European Parliament, which allows the yacht to officially fly the European Union flag. For the past 20 years the project has been uniting sport with diplomacy, social responsibility, culture and business and in 2015, the year when her 20th anniversary is celebrated, the message of friendship and collaboration has extended beyond the borders of the European Union, achieving a global dimension with recognition by Secretary-General of the United Nations, H.E. Mr Ban Ki-moon.