Eskaton, a nonprofit community-based organization serving seniors throughout Northern California, receives two MarCom awards for its No Falls League video, which has received over 100,000 views and national attention. 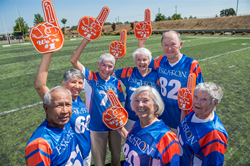 We are grateful to be recognized in our continual efforts to raise awareness of falls prevention and ongoing efforts to transform the aging experience.

Eskaton was recently recognized with two MarCom Platinum awards in the Non-Profit and PSA categories for its No Falls League video, in which members of its Fall Prevention League show their peers how to have fun while exercising and preventing falls. “We are grateful to be recognized in our continual efforts to raise awareness of falls prevention and ongoing efforts to transform the aging experience,” said Sheri Peifer, Senior Vice President at Eskaton.

The No Falls League video was a dedicated, joint effort between Eskaton staff and the residents ages 67 to 95 who starred in the falls prevention video. “I am proud of each of the participating residents, as they have worked so hard in our exercise classes to reduce their own fall risk and they volunteered to be part of the efforts to help others reduce their fall risk as well,” added Peifer.

Since its release, the No Falls League video has received over 100,000 views and continues to grow as more people learn about Eskaton's fall prevention efforts, which include exercises, a downloadable fall prevention checklist and community efforts to ensure that every Sacramento area senior has access to the resources they need. "Our video competed against 6,500 entries from throughout the United States, Canada and 17 other countries," concluded Peifer. "Numerous Fortune 500 companies and world-famous organizations have won these prestigious MarCom awards."