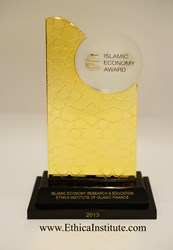 We are deeply honored to receive this award from His Highness Sheikh Mohammed. Ethica shares Dubai’s vision to create a strong capital for a vibrant Islamic economy, at the center of which is a capable workforce of Islamic finance professionals.

Ethica Institute of Islamic Finance, the Dubai based global certification institute, received the “Islamic Economy Award for Research and Education” from His Highness Sheikh Mohammed bin Rashid Al Maktoum, Prime Minister of the UAE and Ruler of Dubai. Ethica was chosen from among established and emerging companies that demonstrated significant business and social impact, with Thomson Reuters managing and Deloitte auditing the process at the Global Islamic Economy Summit where the awards were presented. Ethica is best known for its 4 month online Certified Islamic Finance Executive (CIFE), now held by professionals in 56 countries at over 100 institutions.

For an institute that certifies professionals, the award could not have come at a better time: on the eve of Dubai’s Expo 2020 win, the regional job market is set to boom. According to news analyst MEED, more than 277,000 jobs will be created between 2013 and 2021, with around 60 additional jobs sustained for every Expo employee. With this, Sheikh Mohammed also seeks to promote Dubai as the capital of the Islamic economy.

The confluence of Dubai’s vision as the hub of the Islamic economy along with booming demand from Expo 2020 means that thousands of new entrants are set to be certified in Islamic finance in the coming years. Ethica is uniquely positioned to meet this demand with its scalable online platform, a platform that has already trained thousands of bankers around the world, including hundreds at several global banks.

Mohammad Abdullah Gergawi, Chairman of the Executive Office of Sheikh Mohammed, said, “With the ever-increasing interest in the Islamic economy and the growing need for its products and services, it is essential for us to acknowledge the contributions made by business leaders in this sector and shine a light on the role they have played in the development of this sector.”

“We are deeply honored to receive this award from His Highness Sheikh Mohammed and Dubai’s leaders. Ethica shares Dubai’s vision to create a strong capital for a vibrant Islamic economy, at the center of which is a capable workforce of Islamic finance professionals,” said Ethica’s spokesperson.