Etta Blann’s new book “3 Broken Mirrors: 21 Years of Bad Luck” is a tragic story about the life of Anna Baker, based upon true events in the author’s own life 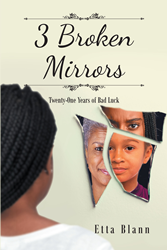 Etta Blann, a Virginian actor that starred in the 2019 award-winning documentary, “End the Silence,” has completed her new book “3 Broken Mirrors: 21 Years of Bad Luck”: a gripping and potent fictional account about Anna Baker, based on Etta’s true life.

“Hanging out in St. Michaels was more laid back than hanging out in Easton. St. Michaels was more like Oxford but slightly bigger. Anna was walking one day from The Crab Claw restaurant when two boys approached her. Anna thought nothing of it because she knew one of the boys, Terry, but she did not know who the other boy was. Most of the road they were walking down was lined with water filled with boats, but there was a stretch of the road that was lined with woods. As they were walking along the wooded part of the street, Terry and the other boy pulled Anna into the woods. Anna fought as hard as she could, but they overpowered her. Terry held Anna down, while the other boy raped Anna. Anna thought, Not again. How could this be happening to me? Why were so many different people abusing me in this way? When the boys were done, they just ran off laughing like it was nothing. Maxwell ended up eventually getting a house in Easton down the street from one of his brothers. Anna was happy about that because nights in Easton were live. For the next few years, Anna just enjoyed her life running the streets clubbing. Judy showed up one day to see her grandson. Anna let her take him for a few months, so Maxwell could get a break, but Maxwell was upset the baby was gone. While Anthony was with Judy, he became ill and ended up in the hospital after having a seizure. Judy had to go to court and get joint custody to get him out of the hospital.”

Anna started out life in a happy home in the small town of Oxford, Maryland. However, the horrifying circumstances that she faces, starting with the happy home splitting apart, lead her to contemplate suicide. She suffers through blood, pain, many adversities, and hardships. From her parents separating and getting beaten by her step-father to being raped by strangers, Anna has faced it all. If something could possibly go wrong, it does for Anna. For example, even just staying with friends, the house ends up burning down completely while she was there. However, through it all, Anna persists and does not end her life, even though she has contemplated it, many dreadful times.

Readers who wish to experience this chilling work can purchase “Broken Mirrors: 21 Years of Bad Luck” at bookstores everywhere, or online at the Apple iTunes Store, Amazon, Google Play, or Barnes and Noble.