Eugene O. I. Michael-Uhuegbu’s newly released “Why the Earth Must Die” uncovers a compelling perspective on the issue of satanism

“Why the Earth Must Die” from Christian Faith Publishing author Eugene O. I. Michael-Uhuegbu is an enlightening discourse that holds a discussion about how and why the Anti-Christ spirit is currently threatening the earth. 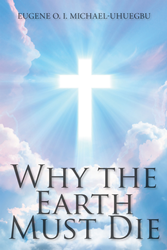 Michael-Uhuegbu shares, “The book laments how the entire world has increasingly turned to open satanism. It shows how and why the Anti-Christ spirit in various religious apologies is on the rampage today, trying to assert itself on the earth and dominate the entire creation. Satan, on the other hand, with his cohorts, is behaving arrogantly in empty loftiness. In these pretentions, some of these satanic cohorts have unleashed satanic-inspired butchery of men and women in the name of religion and in savage acts that are a total expression of the nature of the devil, Satan, who also is called Lucifer. His followers claiming religion and serving ‘God’ have intensified their fight against Christ and His followers—for the world to truly know they are satanic-inspired and anti-Christ. But they are acting out that script which the Lord God Jesus has foretold long time ago and said shall come to be.

“Yeah, the earth and the heavens are about to be judged and destroyed, and all the people on the entire surface of the earth cannot escape it. Though they build homes in the sky, though they make cities in the outer space to escape the reach of God, He will find them out and bring everyone to His judgment. The entire earth and all the worlds and the heavens belong to Him and He has decreed the end of all things. Yeah all things ungodly, not only on earth, but also in the outer space shall perish. All the elements must be destroyed.”

Published by Christian Faith Publishing, Eugene O. I. Michael-Uhuegbu’s new book is a brilliant read that brings to focus how the world today has been influenced with evil. Here, one will gain knowledge and understanding of how mankind responds to temptation and how the church spreads the word of God.
View a synopsis of “Why the Earth Must Die” on YouTube.

Consumers can purchase “Why the Earth Must Die” at traditional brick & mortar bookstores, or online at Amazon.com, Apple iTunes store, or Barnes and Noble.

For additional information or inquiries about “Why the Earth Must Die,” contact the Christian Faith Publishing media department at 866-554-0919.