After gaining attention on the European and New York scenes as a rising force on her instrument, the Swiss-German bassist, composer, and bandleader Eva Kess has created an arrestingly beautiful body of music that sounds unlike any other in the jazz-string canon. Kess's fourth album, "Sternschnuppen: Falling Stars," marks her ascension as a composer/arranger with a strikingly integrated vision that treats all of her collaborators as equals within a single septet. 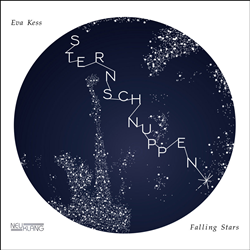 As a double bassist I'm in a team providing rhythmic as well as harmonic information. For me it's about the music as a whole, not only the bass.

It’s no mere matter of semantics that Kess calls her ensemble a septet, as opposed to the more common “trio plus string quartet.” The bassist did not simply fuse two working ensembles together but assembled the group from scratch especially for "Falling Stars"—whose nine tracks she always performs in the same sequence as is programmed on the album. The music is a complex program that depends not on strings accompanying a jazz band, but on all seven members listening to and following each other with as much care as they give to playing Kess’s written notes.

“This is highly contrapuntal music,” she explains, “where every player holds a high degree of melodic and rhythmic responsibility.”

There can be no doubt about that. Whether in the kicky bossa nova of “Porto Alegre,” on which the violins play as integral role in the groove as does the drummer; the bassist’s dramatic enmeshing with the other strings on the pianoless “The Subsequent Use of Yesteryear and Futility”; the every-which-way syncopation of “Experimental Dreaming”; or the bold interactions of “Penta Piece,” it’s clear that Kess’s conception is one that makes great demands on each of her musicians and gives none priority over any others.

This includes Kess herself. Except in her compositional voice, the bassist is no overweening presence on "Falling Stars" herself: she can emerge from the ensemble with a lustrous solo or powerful obbligato, then disappear again into the groove. “As a double bassist I’m in a team providing rhythmic as well as harmonic information,” she says. “For me it’s about the music as a whole, not only the bass.”

In the case of "Falling Stars," the music as a whole is both a reimagination of strings as jazz instruments, and of the fuller possibilities of a jazz ensemble. More than that, it is a scintillating work of art.

Eva Kess was born Eva Patricia Kesselring on April 10, 1985, in West Berlin and grew up in Bern, Switzerland (after spending a few years in Porto Alegre, Brazil). As a child she played piano, advancing enough that as a young teenager she was able to perform a Bach concerto with a symphony orchestra. At 17, however, her world shifted radically. First, she fell in love with the double bass after hearing a street performance by a bass quartet; soon afterward, a friend took her to her first jazz concert, where she fell in love once again.

Taking lessons with bassist Lorenz Beyeler—the bassist she had heard at that first jazz show—and later with fellow Bern bassist Thomas Dürst, Kess made the rounds of the local jazz scene, acquainting herself with both Bern’s musicians and the American and European artists who passed through the Swiss capital. She was soon able to form her own trio. After studying at the Music Academy of Basel, she returned to her hometown where she entered the University of the Arts Bern’s prestigious master’s program in music composition and theory. Among her teachers were pianist/composers Django Bates and Guillermo Klein, both of whom became her mentors.

In 2010, Kess won a scholarship to study in New York, adding the U.S. to Germany, Brazil, and Switzerland in her array of musical and cultural experiences. That same year she also recorded her debut album, "Wondering What Is Coming." After seven years came her long-awaited second recording, "Flying Curly," followed by last year’s unaccompanied album "Bassexperiment" and, now, "Sternschnuppen: Falling Stars."

“Usually, I am an optimist, so I try to see the pandemic as a time found instead of time lost,” says Kess. “A time in which it is very important to keep going no matter what. At the start I’ve been asking myself: What can I do now for my future? And then I’ve decided to write some music, going for long walks in the forest or at the river, talking more with my parents, watching movies and reading some books. Of course the jazz aspect of interactive music is not possible during social distancing, so the communal experience is missing; many things have become a bit abstract lately. Music live and music online is not the same experience. As humans we are social creatures, it is a deep human need to be around others. Yet compositional processes are still the same and composition is pretty solitary and needs a lot of patience anyway.

“So many things are happening at the same time everywhere around the globe. As creators we take and we convert outside influences as well as inside feelings, experiences, convictions, beliefs, etc. All in all it is a very unique time for creators in which it is very important to stay inspired and to be compassionate with yourself and with others.”