The Honolulu Marathon and the Pearl Harbor Memorial Parade are 2 of the top December Events in Oahu. Courtyard by Marriott Waikiki – A Honolulu Hotel welcomes December visitors with special offers - View Offer Details > 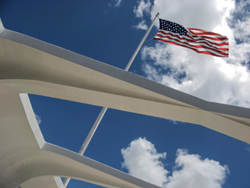 The Pearl Harbor Memorial Parade is a top December Event in Oahu.

Courtyard by Marriott Waikiki – A Honolulu Hotel, has impressive special offers to welcome December visitors who come to enjoy these and other Oahu Things to Do.

December Events in Oahu include a memorial parade, a prestigious surfing competition, and one of the country’s largest marathons. Courtyard by Marriott Waikiki – A Honolulu Hotel, has impressive special offers to welcome December visitors who come to enjoy these and other Oahu Things to Do. View Offer Details >

Vans Triple Crown of Surfing
November 1 through December 20, 2014
North Shore Beaches
Vans Triple Crown of Surfing is one of the most prestigious surfing competitions on the world. Top surfers come from far and wide to take part in this Event in Oahu. North Shore beaches are packed with spectators who come to watch some of the 3 competitions – each of which tests a different set of skills.

Hatsumode 2015
December 31 through January 5, 2014
Hawaii Kotohira Jinsha - Hawaii Dazaifu Tenmangu | 1239 Olomea Street (next to Honolulu Ford in Kalihi), Honolulu, HI, 96817
Tel: 808.841.4755
Japanese culture is prominent on Oahu, and Hatsumode 2015 is one way to learn more about that culture. This event rings in the New Year with a traditional Japanese blessing. Authentic Japanese cuisine, music, and other activities are also part of Hatsumode.

Murphy’s Army/Navy Tailgate Block Party
December 13, 2014
Merchant Street Honolulu, HI
808.531.0422
Oahu is home to many Army and Navy personnel and their families. This Event in Oahu is a show of support to those men and women. Vehicle traffic is stopped, and the entire block becomes one big party. Live music, food, and fun activities are all part of Murphy’s Army/Navy Tailgate Block Party.

Honolulu Marathon
December 14, 2014
Ala Moana Beach Park | 1201 Ala Moana Boulevard Honolulu, HI 96814
The Honolulu Marathon is one of the largest marathons in the country – only New York City’s, Chicago’s, and Boston’s marathons are bigger. Unlike those races, there are no minimum time requirements to participate. That means that runners of all fitness levels are eligible.

About Courtyard by Marriott Waikiki – An Oahu Hotel:
Our Oahu Accommodations give our guests the chance to experience all the best that Oahu has to offer – all within a short distance of our conveniently located Honolulu Hotel. Courtyard by Marriott Waikiki Beach is just a few steps from the world-famous Waikiki Beach and a short drive from Honolulu International Airport.

The beautiful Guest Rooms at Courtyard by Marriott Waikiki feature comforts and amenities that make all of our visitors feel right at home. Guests can email or post pictures using our super-fast complimentary internet connections, watch movies on flat panel TVs, and get tips from our Concierge about Oahu Attractions, Oahu Events, Oahu Activities, Oahu Restaurants, Oahu Shopping, and more. Private Lanais and Dreamer Beds with Pillowtop Mattresses assure a relaxing stay.

Take a Photo Tour of our Waikiki Hotel and the island of Oahu.