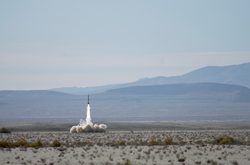 "The goal is to enable nanosat developers of all shapes and sizes to more readily access and iterate in space, booking and launching in something resembling real-time.”

Evolution Space, the world’s first nanosatellite incubator, today announced its new brand identity after rebranding from Sugarhouse Aerospace. In addition, the company has moved its manufacturing facility to the Rockford, Illinois area. Evolution Space will offer rapid and affordable suborbital space launches for nanosatellites and other nanosat-sized payloads that can be booked online and direct-to-consumer. It is currently working towards a static fire test in June that will be carried out at its new private motor testing facility built in conjunction with the new plant.

The emergence of Evolution Space comes at a time of accelerating competition among smaller and more cost-effective satellite developers, all demanding more efficient ways to access the unique environment of space. Evolution Space’s incubator approach answers the increasing demand with a platform for startups, research universities, privately-funded labs, and under-funded government programs to test emerging nanosat technologies. By delivering low-cost and frequent launches and reducing the red tape and complications of booking spaceflight to zero, the company will enable rapid iteration for developers in suborbital environments. Once fully vetted, technologies may then be deployed into orbit with a growing number of smallsat-savvy orbital carriers. The result will be more financially viable nanosats coming from more places, and a better alternative than launching immature technologies directly into low earth orbit, which is creating a space trash problem.

“Space has gone private over the last decade, and the natural next step is an increasing nanosatellite gold rush to better leverage, diversify and monetize its tremendous potential,” said Steve Heller, CEO and founder of Evolution Space. “With the launch of Evolution Space, we’re hyper-focused on disrupting the intersection of these two markets. We're founded on a firmly-held belief that space is the next foundational, insert-your-purpose-here technology - like the internet was for the last generation. The goal is to enable nanosat developers of all shapes and sizes with goals as diverse as they are - climate, defense, agriculture, research, education, communication, IoT, and, most importantly, sectors that don't exist yet - to more readily access and iterate in space, booking and launching in something resembling real-time.”

Evolution Space has raised $1.1M in seed funding to date from individual angels and seed funds, and has completed two launches since the company’s inception that have reached speeds exceeding four times the speed of sound. Following its static fire test in June, Evolution Space has an aggressive timeline for launching a subscale mission to 75 km in Q3 and a full-scale mission to 130 km in Q1 2022 to prove suborbital launch capability. All upcoming space missions will take place at FAA-licensed spaceports for commercial space launches within the U.S.

The company’s new 7,000-square-foot Rockford area facility is focused on building single-stage rockets that can deliver nanosats to space more quickly and for less money. Evolution Space’s latest rocket is 20 feet tall, measures nearly a foot in diameter, weighs 1,000 lbs, and can carry 60 lbs of rideshared payload. The company’s proprietary rocket propellant fuels all of its rockets.

“$216B will be spent on developing satellites over the next decade, much of which will be attempting to bring tens of thousands of new nanosat technologies to market,” added Heller. “The challenge is getting there quickly and reliably, and getting there and back enough times to get it right. We’ll lower the barrier to space by decreasing launch costs and making booking a payload on a rocket as simple as requesting a ride on Uber.”

Evolution Space is the world’s first nanosatellite incubator. The company will offer rapid and affordable suborbital space launches for nanosatellites and other nanosat-sized payloads that can be booked online and direct-to-consumer. This incubator approach provides a platform for startups, research universities, privately-funded labs, and under-funded government programs to test their new nanosat technologies. Evolution Space is built on a belief that space is the world’s next foundational technology. Its mission is to enable rapid iteration of space-based technologies to drive more progress from more places in less time. For more information, visit http://evolutionspace.com.