International museums, globally respected universities and dozens of scientists make a Jurassic announcement about a new discovery of a Lost World and the $27.5 million project that will bring it back to life. 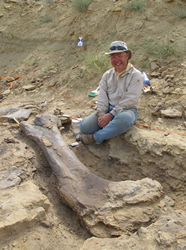 Professor Phil Manning with Brachiosaur femur at the Jurassic Mile.

The Mission Jurassic project reflects a natural synergy between three world-renowned museums, their research scientists and highly-respected research universities, each providing unique elements to complete one of the most interesting chapters in the evolution of Earth.

The Children’s Museum of Indianapolis announced plans today for a $27.5 million project to support a paleontological excavation of a fossil-rich plot of land in northern Wyoming. The project will bring together scientists from around the world because of the rare confluence of Jurassic Period fossil bones, trackways and fossilized plants. The Jurassic site will provide clues that promise to tell a more complete story about the Jurassic Period than has ever been told.

Specimens from the site will form the basis for a major expansion of what is already the world’s largest children’s museum. To accomplish this, The Children’s Museum has two Extraordinary Scientists-in-Residence to lead the project, called Mission Jurassic. They are Professor Phil Manning and Dr. Victoria Egerton of the University of Manchester (Manchester, UK). The project is made possible through a lead gift from Lilly Endowment Inc.

The Children’s Museum will serve as the Mission Jurassic leader. It is partnering with The Natural History Museum (London, UK), the Naturalis Biodiversity Center (Leiden, Netherlands) and the University of Manchester (Manchester, UK). As a result, more than 100 scientists from three countries will join forces to work in what scientists call the Morrison Formation in Wyoming to reveal dramatic new secrets about the world—millions of years ago.

Dr. Jeffrey H. Patchen, President and CEO of The Children’s Museum of Indianapolis stated, “We are bringing together an extraordinary international team for the first time that will critically analyze portions of the Morrison Formation in new ways.” Patchen went on to say, “This project reflects a natural synergy between three world-renowned museums, their research scientists and highly-respected research universities, each providing unique elements to complete one of the most interesting chapters in the evolution of Earth.”

THE “JURASSIC MILE”
Project leaders are calling the fossil-rich, mile-square plot of land, “The Jurassic Mile.” There are four main quarries within the multilevel, 640-acre site that offer a diverse assemblage of Morrison Formation articulated and semi-articulated dinosaurs. The site also has many other animals, marine life, fossil plants and rarely associated dinosaur trackways of the Late Jurassic Period, 150 million years ago (before the Cretaceous Period).


Jurassic dinosaurs as well as telling the stories of the paleontologists who are uncovering new and exciting specimens.

GIANTS OF THE JURASSIC EXHIBITS
Specimens from the well-preserved fossil remains at the “Jurassic Mile” site will form the basis for a major expansion of The Children’s Museum of Indianapolis’ permanent Dinosphere exhibit by adding creatures from the Jurassic Period. The project is already utilizing cutting-edge science, from particle accelerators to some of the most powerful computers on the planet, to help resurrect the Jurassic dinosaurs and add momentum to the process of unearthing the lost world and forgotten lives of the Jurassic. Fossils discovered at the site may also be shared with the Natural History Museum of London and the Naturalis Biodiversity Center in the Netherlands for possible display and/or traveling exhibitions in the future.

Mission Jurassic, The Children’s Museum of Indianapolis’ $27.5 million project, would not be possible without the generosity of Lilly Endowment Inc., which made a $9 million grant to support the project.
Honorary Trustee Susie Sogard and her husband Jack Sogard have also made an extraordinary lead gift to support this project. Toyota generously shared vehicles to safely haul our fragile fossils in an off-road adventure to The Children’s Museum. Additional funds will be needed to create extraordinary family learning experiences resulting from the research and exploration and all institutions will be actively fundraising to make that possible. The Children’s Museum would also like to thank the museum’s official partners—Riley Children’s at Indiana University Health, Old National Bank and Ice Miller LLP.

Theropod's footprintA footprint of a theropod (meaning beast-footed) discovered at the Jurassic Mile by The Children's Museum of Indianapolis as part of Mission Jurassic. This one measures close to four feet long.

Sauropod vertabraeThese vertebrae were discovered by The Children's Museum at the Jurassic Mile site in Wyoming. It is part of an international partnership called Mission Jurassic.

Dinosaur trackway at the Jurassic MileThe Children's Museum is lead on the Mission Jurassic Project in Wyoming. It is partnering with The Natural History Museum (London, England) and Naturalis Biodiversity Center (Leiden, Netherlands) along with University of Manchester, SLAC (Stanford Linear Accelerator) National Accelerator Laboratory, and ESRI.

Fossils arrive by the truck loadFossils from the Jurassic Mile arrive at the world's largest children's museum to be studied and then prepped for display.

Paleo Prep Lab at The Children's Museum, which is leading the Mission Jurassic project.Families are invited to watch as scientists research and prepare dinosaur fossils to be put on display.