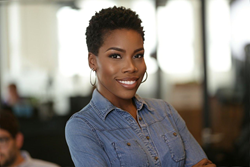 We see this moment as a huge opportunity to introduce the ExecThread of the future, one that’s focused on championing Diversity and Inclusion among the leadership ranks of Corporate America.

ExecThread, Inc., a venture capital-backed professional network of diverse, carefully vetted executives and the largest aggregator of unpublished executive-level career opportunities, announced today that it has crowdsourced over 10,000 hidden executive-level job opportunities, and has added Ryann Richardson as its new President and Co-Founder. Richardson joins ExecThread to lead the transformation of the private executive job sharing platform into a robust member community and diversity talent acquisition tool.

Richardson comes to ExecThread after a decade working in the technology, media and communications sector. She was most recently Vice President of North American Marketing for the on-demand private jet marketplace, Victor, where she spearheaded the UK-based brand’s entry into the US market, and also headed global culture building. Prior to Victor, Richardson led East Coast regional marketing and strategic partnerships at Uber. While at Uber, she was also a founding member of the employee-led Diversity and Inclusion Task Force, a precursor to the company’s now robust Global D&I team.

Early in her career, Richardson worked on the national expansion of the MetroPCS wireless brand, launching its Mid-Atlantic markets after T-Mobile’s acquisition of the prepaid carrier.

“Ryann joins us at an exciting and pivotal time,” said ExecThread Founder and CEO, Joe Meyer. “It’s rare for an organization to announce a co-founder after its inception, but we see this moment as a huge opportunity to introduce the ExecThread of the future, one that’s focused on championing Diversity and Inclusion among the leadership ranks of Corporate America. Ryann brings a proven track record as a strategist and diversity and inclusion leader. We are proud to announce such a strong partner as we continue to drive business results and workplace diversity.”

“I look forward to working alongside Joe and the entire ExecThread team to help shape the future of industry by driving access for talented leaders of diverse backgrounds, and championing inclusion in the highest ranks of the business world. Truly effective organizations are built on a foundation of diverse and intersectional perspectives and our work at ExecThread, helping to inject those diverse perspectives at senior leadership levels, will have a profound business and societal impact. I’m delighted to join ExecThread in this transformative period,” said Richardson.

ExecThread connects a diverse community of professionals with career-advancing jobs that are largely inaccessible via the traditional executive recruiting process. To date ExecThread has crowdsourced over 10,000 hidden executive-level job opportunities, and shared them with more than 33,000 vetted, executive-level members of its curated community.

Founded in 2015, ExecThread, Inc. is creating the world's most diverse network of executives and leveraging their collective influence to solve pervasive workplace diversity and culture issues from the leadership ranks outward. It works by empowering a member community of over 33,000 distinguished executives - over half of whom are underrepresented leaders - with professional development tools, an active support network, and access to the most sought-after and elusive executive-level career opportunities. Through a unique crowdsourced model, ExecThread has given its member community access to a previously hidden job market. ExecThread also connects employers and recruiters with top candidates, thereby helping to surface the best candidates and reduce time-to-hire. To join the ExecThread community, click here.