Executive Medicine of Texas puts the Spotlight on Alzheimer’s Disease

Deaths from Alzheimer’s disease are increasing exponentially, but gaining little attention from the general public due to the Covid19 pandemic and other issues. Executive Medicine of Texas is working diligently to change the narrative and place focus on education and prevention of this terrible disease. Their first move, is hosting the first Alzheimer’s and the Arts Event, which will showcase the film "Have You Heard about Greg?" 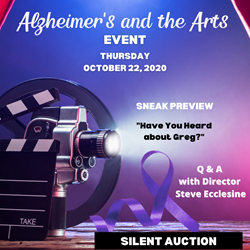 Alzheimer's and the Arts Event at the Palace Arts Center in Grapevine, TX

“This is a special event,” states Judy Gaman, their CEO, “because we’re focusing on education while raising money for the Alzheimer’s Association and the Guzman 23 Foundation.”

According to the Alzheimer’s Association, since the year 2000, deaths from Alzheimer’s have increased by 146%. This is while deaths from heart disease have decreased by 7.8%. Alzheimer’s Disease is the sixth leading cause of death in the US, claiming more lives than breast cancer and prostate cancer combined.

“Our patients are concerned about their brain health and so are we,” says Mark Anderson, MD and one of the founders of Executive Medicine of Texas. “Years ago we made cognitive testing part of our routine executive exams. Shockingly, we’ve seen a significant number of patients, younger than ever, who are complaining of some sort of cognitive disruption. As a physician, it’s alarming.”

The Alzheimer’s and the Arts Event is the first of many efforts that Executive Medicine of Texas will be pushing to raise awareness for the disease. “This is a special event,” states Judy Gaman, their CEO, “because we’re focusing on education while raising money for the Alzheimer’s Association and the Guzman 23 Foundation.” Gaman, who knows from family experience just how devastating this disease can be, is championing the effort. “Having people like Steve Ecclesine, Greg O’Brian, and Warren Honeycutt involved so heavily in the Alzheimer’s and the Arts event brings it to a whole new level.

Steve Ecclesine, a Hollywood producer with over 700 films and TV shows to his credit is the producer of the film Have You Heard about Greg? He will be at the event for a Q&A session directly following the premier event. The film, showcasing the life of Greg O’Brian as he battles Alzheimer’s, has not yet been released. “I’m very interested to receive feedback from the audience and share the story of how this documentary came to be. Out of all the films I’ve worked on, this one is near and dear to my heart.” Those attendees who wish too will receive a chance to give on-screen testimonials about the films impact that will become part of the films marketing efforts.

Greg O’Brian’s highly acclaimed internationally award-winning book On Pluto: Inside the Mind of Alzheimer’s, is the first book written by an investigative reporter who’s actually inside the mind of Alzheimer’s. Much like the book, the film, Have You Heard about Greg? shows what Greg and others have learned about the disease and uses science, faith, hope, and humor to broach a topic that needs much more attention.

Warren Honeycutt, six-time Mr. America Fitness finalist, media fitness expert and author of the book How the Health Are You? has also worked tirelessly on this project and will be at the event. Attendees will have a rare opportunity to bid in the silent auction for a chance to be personally coached by Honeycutt. Other opportunities within the silent auction include: Coaching or advice session with Steve Ecclesine, a half-day physical examination from Executive Medicine of Texas, art from local artists and galleries, a cosmetic service from Prism Dermatology, a signed photo of Sylvester Stallone with Harry Mok with an official part of the Rambo set, something from Jerry Lee Lewis’s private collection, and more. Silent Auction items will also be available for online bidding starting Friday, October 17, 2020.

Alzheimer’s and the Arts will be held October 22, 2020 at the historic Palace Arts Center theater in Grapevine, Texas. Due to social distancing and precautionary measures being taken to hold this event in-person, seating is limited and reservations are required. Tickets to the film and silent auction are $100. Limited seats at the Director’s Dinner, which includes an inside look at Hollywood with producer Steve Ecclesine can be purchased along with seating at the film for $250. All ticket purchases and donations can be made through http://www.AlzheimersandtheArts.com

Alzheimer's and the Arts Event at the Palace Arts Center in Grapevine, TXOctober 22nd will be a night to remember!

On Pluto has gained international attentionGreg O'Brien details what it's like to live inside the mind of Alzheimer's, in only a way a seasoned reporter could do.