Raymond Santana and Yusef Salaam will focus on the disparities in America's criminal justice system during their appearance at SLCC's Grand Theatre. 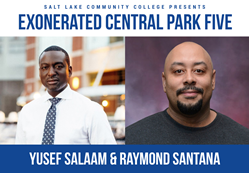 On the night of April 19, 1989, a young woman was brutally attacked and raped while jogging in Central Park. When she recovered, she had no memory of the assault. Five boys, including Raymond Santana and Yusef Salaam, were tried and convicted of the crime in a frenzied case that rocked the city. At the time, the defendants were between 14 and 16 years of age. They became known collectively as “The Central Park Five.”

Since their release, Raymond and Yusef, working as members of the “Exonerated Central Park Five,” have committed themselves to advocating and educating people on the issues of false confessions, police brutality and misconduct, press ethics and bias, race and law, and the disparities in America’s criminal justice system.

The event is free and open to the public, but tickets are required and can be obtained at grandtheatrecompany.com or by clicking here. The Grand is located on SLCC’s South City Campus, 1575 S. State Street in Salt Lake City. Please note that in the event of a sell-out, the Grand Theatre still anticipates having plenty of seating available and will have a first-come, first-served standby line, and most attendees, if not all, will be admitted. Arrive by 6:40 p.m. to ensure seating.

The Grand Theatre is a 1,100-seat venue located at Salt Lake Community College’s historic South City Campus, home of the innovative and state-of-the-art Center for Arts and Media in Salt Lake City. The theatre dates back to the 1930s and combines Depression-era charm with the latest technology in lighting and sound. Each season, the Grand is host to popular concerts, dance performances and award-winning theatre productions that attract arts enthusiasts from all along the Wasatch Front.