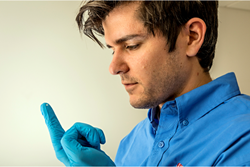 “Our designers produce optical systems in the analytical space that translate quite accurately into actual tests. That shortens our iteration cycles to move quickly toward a highly robust and reliable design for custom laser peening equipment.” Mark Bloomberg, VP Engineering

LSP Technologies Inc. has added even more speed to its rapid deployment of custom laser peening equipment, thanks to an expanded team of laser and optics experts. Together, team members are pioneering new designs for delivering laser peening to hard-to-reach parts, including some involved in the maintenance of nuclear power plants and aircraft.

"Adding expertise in optical design was an essential piece in enhancing the organization and providing more innovation to our customers at speed," said Mark Bloomberg, LSP Technologies Vice President of Engineering. “Today, we can come up with an optical design and integrate it into mechanical and controls systems in a very short cycle,” Bloomberg said.

“We can design systems in the analytical space that then translate into the test space, and our tests very closely match our analytical models. That shortens our iteration cycles that are necessary to converge on a highly robust and reliable design for custom laser peening equipment,” Bloomberg said.

The optics team, working with other engineers and product developers at LSP Technologies, are successfully addressing customer applications requiring:

“Our challenge may be a part geometry where we have to reach a difficult spot. We may have a constraint on the part that requires some unique optical, mechanical, or controls features. And we are meeting those challenges and so many more by continuously building on our experience in the optical space,” Bloomberg said.

The foundational optics expertise at LSP Technologies began with company founder Dr. Jeff Dulaney, President and CEO, and a pioneer in laser peening technology. Dr. David Sokol, who joined LSP Technologies almost immediately after its founding 25 years ago, has deep laser and optical experience, too, and both developed many LSPT patents and research papers.

Then, in early 2019, LSPT added two doctoral graduates from The Ohio State University to the optics staff – optical engineers Timothy Gorman and Dietrich Kiesewetter – and the company asked Bloomberg to lead the expanded optics team to support projects for aerospace, nuclear power, and composite adhesives.

The other members of the optic team are two laser systems and applications engineers, Jay Eastman and Dillon de Medeiros, who implement a wide range of experiments and custom designs, including work on Laser Bond Inspection.

In their OSU graduate training, Gorman and Kiesewetter both specialized in attosecond physics (that is working at a scale of 10 to the negative 18th power seconds), running experiments with lasers generating femtosecond (10 to the negative 15th power seconds) laser beams to track the physical motion of electrons and other particles within extremely small time slices.

“The tools we used to track atoms and subatomic particles in our day-to-day work involved laser technology, including fabricating some ‘homemade’ lasers and fixing them when they broke,” said Dr. Kiesewetter. “Our goal was to find new ways of describing different processes involving atoms and molecules – for example, how electrons move. The attosecond lasers – pulsing on and off in very short ‘pulse width’ durations – act as a sort of strobe light showing us snap shots of how small particles behave,” he said.

“We studied laser-matter interactions, and that’s exactly what we do here,” Gorman said.

The focus of that work at LSP Technologies is to balance the power of laser peening with the capability of optical lenses, mirrors, and fiber optics to help deliver laser power to metal.

For example, a key requirement is that lenses focus the laser light without reflecting it backwards.

“We’ll be trying new ways to apply anti-reflective (AR) coatings on our optics,” Gorman said. “As we push the envelope to higher power levels, we may use a process that applies nano patterns to the optics.”

"Sometimes called a “moth-eye” microstructure pattern because it multiplies the image into thousands of nano fragments, these nano-shapes serve as anti-reflective surfaces that eliminate the need for AR film. “Moth-eye patterns could provide elegant gains, because they will allow us to put more of the laser energy through,” Gorman said.

"By understanding this kind of technology behind lasers, lenses and mirrors, LSP Technologies is addressing a wide range of customer applications with more speed and accuracy," Bloomberg said.

“We’re overcoming so many challenges, like putting laser energy into the face of fiber optics to provide flexible direction of the laser beam to hard-to-reach components,” he said. “We are pioneering that work at power levels no one in the industry and no one in the world is doing.”