While international travel restrictions remain in place, travelers can get a head start planning the ultimate insiders’ trip to Suzhou using personal recommendations from China-based expats. 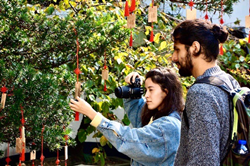 Foreigners based in China explore Suzhou as part of a new campaign by the Suzhou Municipal Bureau of Culture, Radio, Television and Tourism.

"Suzhou has a great atmosphere with the perfect mix of history and modernity," said Christian Wischnewski, a German exeuctive living in Suzhou.

While international travel restrictions remain in place, travelers can get a head start planning the ultimate insiders’ trip to Suzhou using personal recommendations from China-based expats. Through the Suzhou Municipal Bureau of Culture, Radio, Television and Tourism’s new #SecretsOfSuzhou Instagram campaign, foreigners based in China share their first-hand tips for making the most of a trip to Suzhou.

The campaign launched last month with a trip organized by Time Out Shanghai, that brought a group of 30 expats and travel enthusiasts to Suzhou where they explored historical sites like the Suzhou Museum of Inscribed Stone Tablets, took in traditional cultural performances in Suzhou’s classical gardens and on its romantic canals, experienced local life along Shantang Street, enjoyed the outdoors on a hike by Taihu Lake, and more. Several new weekend tour packages departing from Shanghai recently launched as a result of the trip which focus on Suzhou’s architecture and history.

Here are some of the recommendations from those who attended the trip and other foreigners who spend their days in the “City of Culture & Arts.”

Emily Axen, American living in Shanghai
Emily recently attended the nighttime cultural performance held in Master of the Nets Garden and reviews it as a great look into ancient life in Suzhou. She also shares, “I think going to museums with a guide is key. You get so much more information from a guide as a lot of the information is not written in English.”

Christian Wischnewski, German living in Suzhou
According to Chris, Suzhou has a great atmosphere with the perfect mix of history and modernity. He suggests getting out into Suzhou’s beautiful natural areas, including Mudu Old Town, Sanshan Island, and the water town of Tongli. As for a bite to eat? “I really like squirrel-shaped mandarin fish, with the sweet and sour sauce. It’s something really unique that I haven’t seen in more than 60 countries that I have visited until now,” he says.

Robyn Cronje, South African living in Shanghai (IG: @littlebitsofruby)
“Definitely visit the gardens and watch the Kunqu Opera. It is such a great way of storytelling that will leave you feeling like you have experienced a bit of China itself. The boat ride on the canals is also a must. It's tranquil and really gives you the feeling that you're in Venice!” Robyn says.

Yunus Emre, Turkish living in Shanghai
“I always enjoy the relaxed atmosphere of Suzhou every time I'm there,” says Yunus. He describes the city as “culturally deep” and recommends that visitors take the time to enjoy the Suzhou’s historical side on any trip.