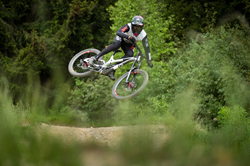 “World Cup Downhill racing is definitely not for the faint-hearted!” Steve Peat

Produced by Monster Energy, ‘Between the Races’ is available now to watch for free as a high-definition video on YouTube here.

First released as a series in 2019, ‘Between the Races’ can now be viewed in its entirety as a 47-minute feature film. Narrated by MTB World Cup legend Steve Peat, the high-definition video follows Monster Energy athletes across the globe from Australia to North America and Europe to Africa. The result is an unfiltered, behind-the-scenes look at elite riders on top of their game, supplemented by previously unseen footage that tells it like it is.

“World Cup Downhill racing is definitely not for the faint-hearted!” said Peat.

Viewers are in for a unique experience, as ‘Between the Races’ explores how varied each of the athletes’ lifestyles is away from the track. Step outside of the pits and into the living rooms, home tracks and private lives of the professional racers to understand what it takes to make it on the World Cup.

‘Between the Races’ shines a light on some of the best riders in the business and what distinguishes them; how they train, where they spend their time off the racetrack and what keeps them hungry for success. We explore how 2018 World Champion Pierron enjoys his life in the French countryside, how the consistent podium dominator Brosnan keeps his competitive edge Down Under and what empowers freeracer Fairclough to mix his World Cup training with a successful filming career.

‘Between the Races’ was filmed, edited and produced by Aspect Media. With close ties to the core mountain bike scene, Aspect has built a solid track record of acclaimed productions including ‘Deathgrip, the Movie’ (2017), the Fest Series and EWS, alongside high-profile videos for leading mountain bike brands.

“For me, they all just really, really love riding bikes. Sounds simple but they all still seem to be keeping it fun and want to be doing it. They all train super hard, all have tracks close to home and have a small key group of mates to ride with,” said Jacob Gibbins of Aspect Media about the common denominator between these top racers.

But don’t take anyone’s word – see for yourself! Viewers can now go online and watch the fast-paced video on YouTube in full HD. With a soundtrack by the likes of Wake Me and Paulie Rhyme + Deedot featuring Rasco (Cali Agents), it’s 47-minutes of downhill MTB action interspersed with motivational stories from the best in the game. Find out what happens Between the Races…

Media representatives can browse high-resolution images from the making of ‘Behind the Races’ for editorial use by clicking here.

About Aspect Media
Aspect Media is a full-service high-end production company based in Bristol and London but more used to working on various mountains around the world. Founded and run by creatives Chris Seager and Jacob Gibbins, Aspect Media specializes in adventure sports, especially all things cycling as well as corporate, lifestyle, brand, narrative, and documentary work. https://aspectmedia.tv/