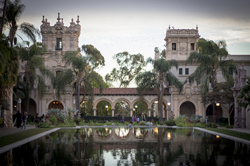 "Balboa Park TV is a great outlet for amplifying the reach of the new content that organizations throughout Balboa Park are producing during the COVID outbreak, as well as showcasing existing content."

With 'stay at home' orders from officials due to COVID-19, people who love arts, science and culture now have one place where they can access content from their favorite Balboa Park venues. Introducing Balboa Park TV!

Balboa Park TV is a one-stop portal for video content with activities, fun facts, historical footage, and more represented by over 20 Balboa Park venues, including the Fleet Science Center, San Diego Air and Space Museum, and the San Diego Natural History Museum. This portal not only pulls together new and existing video content from various channels, a new daily vlogger-style show called Balboa Park to You also highlights social media efforts, podcasts, and other information and content being produced by organizations across Balboa Park. Visitors to the portal also benefit from watching recorded Virtual Explorer Experiences featuring experts from park organizations, which are initially 'live' and interactive as a benefit for Balboa Park Explorer annual pass holders.

Link to the portal: http://www.balboaparktv.org

Jazmine Rogers, a new employee of the Cultural Partnership, is the host of Balboa Park to You. Jazmine will review videos, share out virtual tours and apps, and guide viewers to engaging website and social media content with each episode.

Jazmine said "I feel it's so important to give people a break from the news and put a smile on their faces. And by hosting Balboa Park to You I am discovering and sharing the history, stories, and expertise found in Balboa Park with viewers at home."

"Balboa Park TV is a great outlet for amplifying the reach of the new content that organizations throughout Balboa Park are producing during the COVID outbreak, as well as showcasing existing content," added Dr. Steve Snyder, CEO of the Fleet Science Center and President of the Balboa Park Cultural Partnership. "We know people love Balboa Park, and we are excited to be able to bring that to people in their homes."

Balboa Park TV officially launches on Monday, April 6th. In addition to Balboa Park TV, the portal contains a link to a LiveChat function allowing would-be visitors to ask questions, as well as links to closure information from park organizations.

ABOUT THE CULTURAL PARTNERSHIP
The Balboa Park Cultural Partnership serves as the collaborative body and collective voice for 26 arts, science, and cultural institutions in Balboa Park. Together we achieve greater effectiveness, innovation, and excellence and contribute to the vitality and sustainability of Balboa Park. Our collective of 500 trustees, 7,000 volunteers, and 3,500 staff serve more than 6.2 million visitors annually. Learn more at http://www.bpcp.org

ABOUT BALBOA PARK
Located near downtown San Diego, Balboa Park is the largest urban cultural park in the United States. First established by the City of San Diego in 1868, it is also one of the oldest city parks in the nation and is the most visited single destination in San Diego. Its 1,200 acres include 17 museums, many gardens and attractions, the San Diego Zoo, miles of hiking trails, and multiple athletic complexes to explore and discover. For more information, visit http://www.balboapark.org