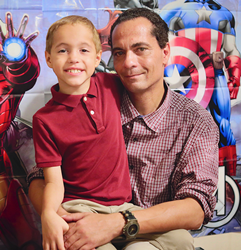 Every day, we are privileged to work with exceptional employees, and we are so proud of James Michael and the Express office that saw his potential and invested in his success. James’ story shows the true value of work and the hope it can provide. - Express CEO Bill Stoller

Each year, ASA invites qualified staffing agencies to nominate their outstanding workers for the honor of National Staffing Employee of the Year. In addition to the top prize, four All-Stars are chosen in four sectors: engineering, information technology, and scientific; health care; industrial and office–clerical and administrative sector. The annual National Staffing Employee Week celebrates the contributions of the more than 15 million temporary and contract employees hired by U.S. staffing agencies each year.

“Every day, we are privileged to work with exceptional employees, and we are so proud of James Michael and the East Stroudsburg, Pennsylvania, Express office who saw his potential and invested in his success,” Express CEO Bill Stoller said. “James’ story shows the true value of work and the hope it can provide.”

Michael was placed on his first assignment with Express in 2009 before moving out of the area. In 2016, realizing his young son was lacking care and attention while living with the child’s mother, he once again connected with Express for work. Michael was placed in a temporary building maintenance role and later transitioned to an assignment at a large Rehrig Pacific Co. distribution center, where he gained on-the-job forklift experience.

His hard work was recognized by the client, and Michael was offered a permanent role, allowing him to gain full custody of his son. Unfortunately, his schedule changed, creating day care conflicts, so he turned to Express again to find a job with the desired flexibility and work–life balance.

Michael was assigned to BE Aerospace, making small parts for the aviation industry. In a short amount of time, he was offered a permanent role with the client. Staffing led Michael to a job that allows him to properly care of his son and work on the child’s developmental needs. In fact, the young boy is now excelling both academically and socially.

The National Staffing Employee of the Year All-Star Award tops off a memorable year for Michael, who also won the Express Employee of the Year award at the company’s International Leadership Conference in March. Michael and his son accepted the honor in person in Grapevine, Texas, where he was recognized for his outstanding work in front of more than 1,700 Express franchise owners and their staff.

“We felt James had many obstacles in his way, which so many would use as reasons to miss work, but he never did,” said Terry Lukas, Express franchise owner in East Stroudsburg, Pennsylvania, at the time. “James did so much to get his young son into a better living environment, and you just don’t see that happen often. When someone shows such determination to improve not only their life, but the life of their child, they deserve to be rewarded. He never put himself first, instead he continued to do everything in his power to better the life of his son.”

About the American Staffing Association
The American Staffing Association is the voice of the U.S. staffing, recruiting, and workforce solutions industry. ASA and its state affiliates advance the interests of the industry across all sectors through advocacy, research, education, and the promotion of high standards of legal, ethical, and professional practices. For more information about ASA, visit americanstaffing.net.