Express Employment Professionals is named No. 1 staffing/recruiting franchise in 2020 Entrepreneur Franchise 500® for the ninth consecutive year. 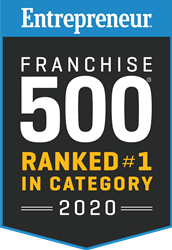 Entrepreneur’s 500® list is one of the most distinguished rankings, and Express is proud to have held the top spot in staffing/recruiting for nearly a decade. - Express CEO Bill Stoller

Leading the industry, Express Employment Professionals was once again named the No. 1 Staffing Franchise for the ninth consecutive year in Entrepreneur Magazine’s annual Franchise 500® list released Tuesday. The company also landed in the top 100 franchise brands out of more than 1,100 competitors.

“Entrepreneur’s 500® list is one of the most distinguished rankings, and Express is proud to have held the top spot in staffing/recruiting for nearly a decade,” Express CEO Bill Stoller said. “This recognition is a testament to the hard work of our franchisees and their commitment to offering hope through employment. As we enter a new year, we look forward to fulfilling more entrepreneurs’ dreams of business ownership backed by a proven system.”

Entrepreneur editor-in-chief Jason Feifer praised the companies on the list for understanding what consumers want now.

“Making our list means (these companies are) forward-thinking, nimble and closely in touch with their customers’ needs—because in an ever-changing business environment, that’s what a franchise must do to thrive,” he said.

To determine Franchise 500® rankings, companies were evaluated on financial strength and stability, growth rate and the number of years a company has been in business. Express celebrates its 37th anniversary in 2020.

With more than 825 franchises internationally, Entrepreneur and Forbes further recognized Express on their Top 100 Franchises for Less than $150,000 list and One of America’s Best Franchises to Buy in 2019, respectively. Staffing Industry Analysts added to the accolades by naming Express the sixth-largest staffing firm in the U.S. and 11th largest global staffing firm.

“Express continues to make strides to put a million people to work annually, and it is truly an honor to be recognized as one of the top franchise companies along the way,” Stoller said. “We hope to add many more owners to our family and network of success in the coming year.”