An Express Employment Professionals survey reveals hiring is strong leading into 2020, but 82% of job seekers say finding a new job will be difficult in the new year. 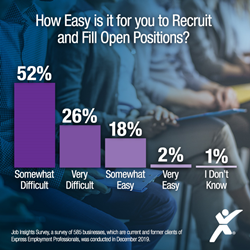 Employers and job seekers need to meet in the middle in the new year with candidates proving their value and companies willing to pay for it. - Express CEO Bill Stoller

The next decade is set to kick off with near record low unemployment, leaving businesses scrambling to find skilled workers or candidates who will even show up for the interview. Yet some job seekers say it will be even harder to find employment in 2020. So, where is the disconnect?

In a recent Express Employment Professionals Job Insights survey of business leaders, 26% of respondents said it is “very difficult” to fill open positions, with more than half, 52%, reporting it was “somewhat difficult.” The number of decision makers who said recruiting was “very difficult” is down from 33% in January 2019.

The number one reason businesses can’t find candidates is the robust health of the economy/job market, according to David Robb, director of marketing at the Grand Rapids, Michigan, Express office.

“Almost everyone who has quality skills and wants to be employed is already working,” he said. “To attract top talent, employers will have to lure them away from other companies or catch job seekers in a time of transition.”

In Mobile, Alabama, Express franchise owner Chris Ashcraft says companies must be willing to offer competitive wages to not only attract job seekers, but to make sure they stay.

“If you are not willing to pay (more), it is difficult to find reliable workers,” he said. “The key word is reliable. I can fill a $10 per hour job, but they may walk off or not show up at all.”

Unemployed in a Time of Low Employment

Surprisingly, 46% of job seekers said finding a new job in 2020 will be “somewhat difficult” in a December 2019 Express survey of job seekers. Another 36% percent agreed that securing employment would be “hard.”

One job seeker said they had applied to more than 75 businesses with only three interviews. Another added that most companies in their area promoted from within, making it harder to move forward to a better position.

But Wakefield, Massachusetts, franchise owner John Dickey disagrees with this outlook and says the reason for the mismatch between companies and job seekers boils down to pay.

“People who are eligible and willing to work should be able to find a job in this market,” he said. “However, we talk to candidates who expect a higher pay rate than employers are willing to pay for their skills and experience.”

“We do see candidates who have an unrealistic pay expectation,” she said. “With all the hype about some states requiring a $15 per hour minimum wage, some unskilled people walk into a company expecting that salary with a spotty job history. While a lot of skilled positions pay more, a $15 per hour required minimum wage isn’t here yet, despite some people who are starting to expect that pay rate.”

What Employers are Looking For

For those who predict finding a job in 2020 will be difficult, a strong work ethic/integrity is the No. 1 attribute business leaders value in candidates per the Express Job Insights survey.

Ashcraft agrees and says this is because businesses are willing to raise wages and expect more from employees who work hard and possess integrity.

And while Robb also put work ethic/integrity at the top of his list of traits, he says these actually play more of a role down the line.

“This, and attitude, are the most important aspect in keeping a job, but is less of a factor in getting a job, because it is hard for employers to see it until candidates are hired,” he said. “Job experience and consistent work history are what employers end up looking at since they can’t always tell attitude and work ethic before hiring employees.”

“As we saw in 2019, jobs are out there, and businesses are desperate to fill them,” said Bill Stoller, CEO of Express. “But employers and job seekers need to meet in the middle in the new year with candidates proving their value and companies willing to pay for it.”

About the Surveys
In December 2019, Express Employment Professionals surveyed 585 business owners, decision makers and human resource professionals about the overall national hiring trends in the market today and how their business is impacted.

The survey of 200 workers and job seekers was conducted in December 2019 on the Express Job Journey site.