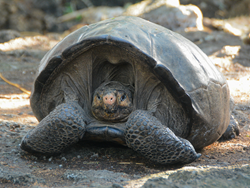 “Fern,” the female tortoise found on Fernandina Island in 2019.

To avoid the same tragic fate as Lonesome George – the last Pinta Giant Tortoise who died in 2012 – an urgent expedition to Fernandina Island will be launched by GNPD and Galapagos Conservancy to find a mate and save the species.

At the time of discovery, the GNPD and Galapagos Conservancy team was confident that the female Giant Tortoise was the lost Fernandina Giant Tortoise. However, to verify their assumption, a blood sample was sent to geneticists at Yale, where a team led by Dr. Gisella Caccone sought to uncover the genetic origin of the female tortoise and determine how closely it matched the only other tortoise ever found on Fernandina Island, a now-deceased large male found in 1906.

Nicknamed “Fern” by her discoverers, genetic analysis has now confirmed that she is related to the Chelonoidis phantasticus tortoise species native to the island. These findings verify what researchers at Galapagos Conservancy and GNPD had long hoped for.

“One of the greatest mysteries in Galapagos has been the Fernandina Island Giant Tortoise. Rediscovering this lost species may have occurred just in the nick of time to save it. We now urgently need to complete the search of the island to find other tortoises,” said Dr. James Gibbs, Vice President of Science and Conservation for the Galapagos Conservancy and tortoise expert at the State University of New York.

“We desperately want to avoid the fate of Lonesome George,” said Danny Rueda Córdova, Director of the Galapagos National Park Directorate. “My team from the Park and Galapagos Conservancy are planning a series of major expeditions to return to Fernandina Island to search for additional tortoises beginning this September.”
Fernandina Island’s landscape is dominated by an active volcano that makes expeditions very challenging. If a male tortoise is located on the volcanic terrain, he will be united with the lone female at the Galapagos National Park’s Giant Tortoise Breeding Center in Santa Cruz. Scientists would then oversee breeding efforts, rear any young safely in captivity, and eventually return them to safe habitats on their native island of Fernandina.

Prior to the 2019 discovery, only one specimen of the Fernandina Giant Tortoise had ever been found — a male collected during the California Academy of Sciences expedition in 1905-06. While populations of Giant Tortoises were decimated throughout the Galapagos archipelago in the 19th century due to exploitation by whalers and buccaneers, the Fernandina Giant Tortoise species was believed to be extinct due to volcanic eruptions in past centuries. The current population of Giant Tortoises throughout the Islands is only 10-15% of its historical numbers, estimated between 200,000-300,000 individuals.

But there is hope. Park rangers have found signs (tracks and scat) of at least two other tortoises on Fernandina Volcano during the searches that resulted in the discovery of the lone female. Galapagos Conservancy has launched an urgent appeal at galapagos.org/savethefernandinatortoise to raise funds to undertake the expedition to find these and perhaps other tortoises to save this species from the brink of extinction.

Images for Media Use: Unrestricted use with credits to “Galapagos Conservancy” and photographer(s) listed in each image. View album.